Yesterday my London perambulations took me from St Paul's to Soho. All around me little notes of defiance sounded out; St Paul's standing up to the Blitz; Soho campaigners trying halt the bulldozers.

Say what you like about us Londoners, we're fighters to the end.

Only one thing defeats us: Christmas in early November.

One Londoner has already given up, as we can see in this picture taken outside St Paul's Cathedral yesterday… 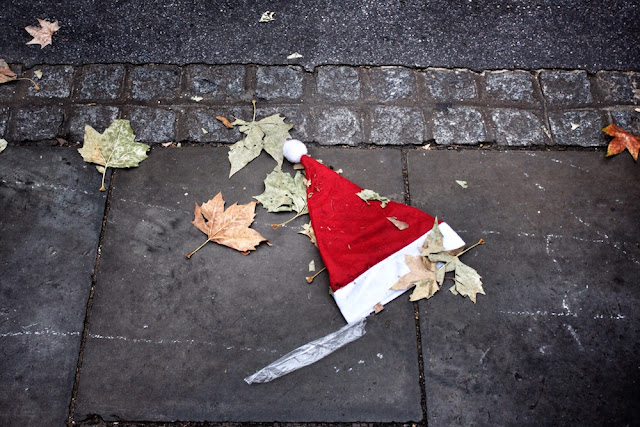 Sickened by one mince pie too many – and the sun hadn't yet set on Armistice Day – this Londoner seems to have simply thrown in the towel.


Perhaps there's a more sinister side to our pic. Maybe old Santa Claus himself has taken one look at us with our tinkling Xmas bells in shops, our decorations the day after bonfire night, our TV adverts mangling perfectly good Oasis songs into sentimental mush, our "controversy" over Starbucks red cups (it's just a cup! And the coffee's crap and they don't pay enough tax!) and our posters announcing special Xmas deals in SEPTEMBER, like this one…


… and he's just said to himself, "Sod the lot of you!" and cast his red cap to the ground and walked away.

"If your celebrating Christmas before Thanksgiving," perhaps he's saying, "then you're ALL on the naughty list."

Who could blame him?

Only time will tell, but maybe Santa Claus won't be coming to town this year after all. And we've only got ourselves to blame.


Did you see Santa tossing his hat away at St Paul's yesterday and heading for the Bahamas? If so drop us a line or leave a comment below.

Email ThisBlogThis!Share to TwitterShare to FacebookShare to Pinterest
Labels: Christmas in London