I got into architecture because I was searching for a way to produce in the world. I went to art school and thought I would do it through art, but I realized very quickly that I was interested in the social ramifications of form making. So buildings became the vehicle and fulfilled that thing. That satisfied me when I produced them. I decided this is what I wanted to do with the rest of my life.

Read the interview at www.interviewmagazine.com

"We saw well-meaning men once again deciding that their theories were best suited for meeting the needs of women."

Read the full article at broadly.vice.com

Up-and-coming: Suicidally boring and unattractive parts of London where no one really wants to live but you now have no choice.

Full story at Time Out www.timeout.com

SHOPPING: Pavillion Books to Open in Covent Garden – The Bookseller

Okay, we get a bit of rain here in London – on average about 109 days worth, according to Travel Pulse and journalist Josh Lew:

Actually, London’s image as a rainy destination is a bit overblown. On average, it rains about 109 days per year. While that is a lot compared to many other cities, the number shows that the chances of having your UK vacation completely rained out are not as high as you might think.

Broadly, Mr Lew's article is pretty positive about our climate – for this, much thanks Josh. But we have to note that he's also a teensy little bit of a big sissy when it comes to a few drops of rain:

Tourists can take a “when in Rome” approach and similarly ignore the precipitation. However, a squall could prove quite unpleasant if you are planning a stroll through Hyde Park or a sightseeing walk around the West End or Notting Hill.

It takes more than a few spots of rain to deter a London Walker. And that's just ONE of the reasons why we love you.

You can also catch up with our earlier love letter to the London Rain HERE.

Read in London This Week

We had a lovely time with the Nikon Owners Photography Group on Wednesday on the Ghosts of the Old City Walk. Here's one of the shots from the tour… 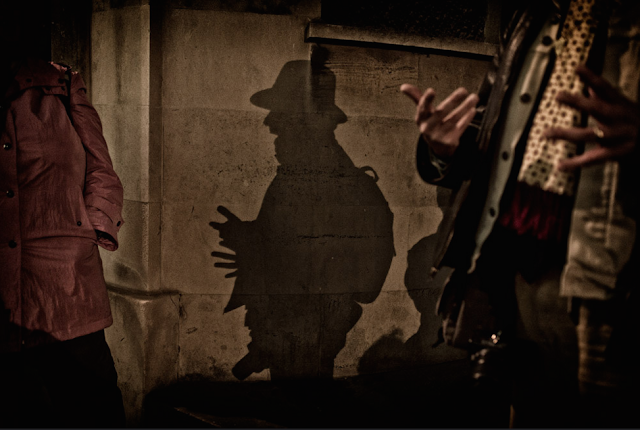 London Spy will return next Saturday. Have a great London week!