Have we witnessed a first public clash between a future President of the United States and a British Prime Minister-in-Waiting?

Republican Presidential hopeful Donald Trump has been saying some rather devisive – and unfounded – things about our London. By his reckoning, some parts of London are: "So radicalised the police are afraid for their lives".

Here's how BBC London reported it on social media… 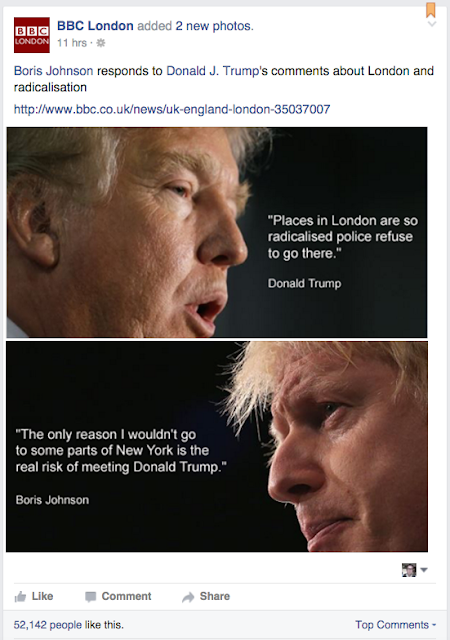 You can read the full story here: www.bbc.co.uk/news/uk-england-london

It's not the first time that a Republican trying to be President has made ill-informed comments about our great city. Back in 2012, Presidential-failure-to-be Mitt Romney criticised our fitness to stage the Olympic Games. Which was very rude of him. He felt qualified to bad mouth us because he had been chief exec of the Salt Lake City Winter Olympics in 2002.

"We are holding an Olympic Games in one of the busiest, most active, bustling cities anywhere in the world. Of course it’s easier if you hold an Olympic games in the middle of nowhere.”

Email ThisBlogThis!Share to TwitterShare to FacebookShare to Pinterest
Labels: Trump