#London In Poetry: A Few Lines on Spenser 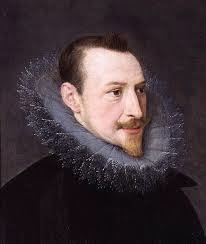 Sweete Themmes runne softly, till I end my Song.

The line is very famous. Deservedly so. It’s by the Elizabethan poet, Edmund Spenser. It’s from his poem Prothalmion.

According to Ben Jonson, “that the Irish having robbed Spenser’s goods and burnt his house and a little child new born, he and his wife escaped, and after he died for lack of bread in King Street.”

The story of that escape – through an underground tunnel known as “the fox hole” – is a remarkable tale, though for another time.

Today we’re doing the obsequies – paying our respects. And tracking Spenser down in London.

There’s a couple of brilliant – and oh so London – blinds from where we can catch remarkable glimpses. The Abbey of course, where Spenser is buried, next to Chaucer.

But also the little lamb next to the Ewe of the Abbey – St. Margaret’s Westminster. It’s where Edmund Spenser was married. Edmund Spenser and Pepys and Milton and Winston Churchill and, well, you get the idea.

And there’s another St. Margaret’s connection. Sir Walter Raleigh – well, most of Sir Walter – is buried in St. Margaret’s. Spenser and Raleigh were chums. They were neighbours in Ireland. Spenser’s was the next plantation over from Raleigh’s.

And of course there’s lots of “in the ether” – in the poetic ether – connections.

As Spenser’s biographer puts it, “Spenser’s work has had an enormous influence over the course of English poetry in the four centuries since his dead. His most widely read poem has been The Faerie Queene, which any aspiring English poet has felt obliged to read carefully and imitate.

Some instances: Blake’s poetry and art and Keats’ Eve of Saint Agnes spring immediately to mind.

And Milton’s not far behind.

But also – to be noted particularly, this, because this year is the centenary of centenaries – Wilfred Owen. Owen said he read Spenser as a means of transporting himself away from the horrors of the front line.

Not to mention the considerable influence – not least in the shape of their coming to terms with – Spenser exerted on Irish poets. Yeats of course.  But others as well.

Including the greatest poet of our time. A recently departed and sorely missed great poet.

And since our main blind is in and around the Abbey how about one more extraordinary thread in the weave. Think of the late Diana, Princess of Wales’ funeral at the Abbey. Followed by the cortege carrying her to her final resting place, on that island on the family estate, Althorp.  Okay, you’re ahead of me. Your guess is right: Spenser claimed kinship with that much more exalted branch of the family name – the Spenser’s of Althorp.