We interrupt our normal broadcast to bring you this special announcement. 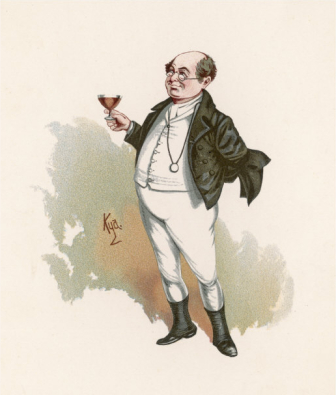 David’s going to have a special day today that’s going to be a whole lot better than Tommy DeVito’s [the Joe Pesci character’s] special day in Goodfellas.

Tonight David’s going to be inducted into the Dickens Pickwick Club. At its annual Christmas dinner held – where else – at the ancient Dickensian George & Vulture Inn in the heart of the City of London.

It’ll be a feast of reason and a flow of soul.

And which Pickwickian will David be?

Allow me to introduce Count Smorltork. (Self-selected by Count S [David] himself – and it is of course, for obvious reasons, the perfect choice.) Said choice – David picked it out several weeks ago – being the aperitif to the feast of reason.

But judge for yourself.

Here’s the Count’s show-stealing moment in The Pickwick Papers.

'I want to introduce two very clever people to each other,' said Mrs. Leo Hunter. 'Mr. Pickwick, I have great pleasure in introducing you to Count Smorltork.' She added in a hurried whisper to Mr. Pickwick — 'The famous foreigner — gathering materials for his great work on England — hem! — Count Smorltork, Mr. Pickwick.' Mr. Pickwick saluted the count with all the reverence due to so great a man, and the count drew forth a set of tablets.

'What you say, Mrs. Hunt?' inquired the count, smiling graciously on the gratified Mrs. Leo Hunter, 'Pig Vig or Big Vig — what you call — lawyer — eh? I see — that is it. Big Vig' —  and the count was proceeding to enter Mr. Pickwick in his tablets, as a gentleman of the long robe, who derived his name from the profession to which he belonged, when Mrs. Leo Hunter interposed.

'Quite well, I thank you,' replied Mr. Pickwick, with all his usual affability. 'Have you been long in England?'

'Do you stay here long?'

'You will have enough to do,' said Mr. Pickwick smiling, 'to gather all the materials you want in that time.'

'Eh, they are gathered,' said the count.

'The word politics, sir,' said Mr. Pickwick, 'comprises in itself, a difficult study of no inconsiderable magnitude.'

'Ah!' said the count, drawing out the tablets again, 'ver good  — fine words to begin a chapter. Chapter forty-seven. Poltics. The word poltic surprises by himself — ' And down went Mr. Pickwick's remark, in Count Smorltork's tablets, with such variations and additions as the count's exuberant fancy suggested, or his imperfect knowledge of the language occasioned.

'This is Mr. Snodgrass, a friend of Mr. Pickwick's, and a poet.'

'Stop,' exclaimed the count, bringing out the tablets once more. 'Head, potry — chapter, literary friends — name, Snowgrass; ver good. Introduced to Snowgrass — great poet, friend of Peek Weeks — by Mrs. Hunt, which wrote other sweet poem — what is that name? — Fog — Perspiring Fog — ver good — ver good indeed.' And the count put up his tablets, and with sundry bows and acknowledgments walked away, thoroughly satisfied that he had made the most important and valuable additions to his stock of information.

A chorus of bystanders took up the shout of Count Smorltork's praise, shook their heads sagely, and unanimously cried, 'Very!'

As the enthusiasm in Count Smorltork's favour ran very high, his praises might have been sung until the end of the festivities, if the four something-ean singers had not ranged themselves in front of a small apple-tree, to look picturesque, and commenced singing their national songs, which appeared by no means difficult of execution, inasmuch as the grand secret seemed to be, that three of the something-ean singers should grunt, while the fourth howled. This interesting performance having concluded amidst the loud plaudits of the whole company, a boy forthwith proceeded to entangle himself with the rails of a chair, and to jump over it, and crawl under it, and fall down with it, and do everything but sit upon it, and then to make a cravat of his legs, and tie them round his neck, and then to illustrate the ease with which a human being can be made to look like a magnified toad  — all which feats yielded high delight and satisfaction to the assembled spectators. After which, the voice of Mrs. Pott was heard to chirp faintly forth, something which courtesy interpreted into a song, which was all very classical, and strictly in character, because Apollo was himself a composer, and composers can very seldom sing their own music or anybody else's, either. This was succeeded by Mrs. Leo Hunter's recitation of her far-famed 'Ode to an Expiring Frog,' which was encored once, and would have been encored twice, if the major part of the guests, who thought it was high time to get something to eat, had not said that it was perfectly shameful to take advantage of Mrs. Hunter's good nature. So although Mrs. Leo Hunter professed her perfect willingness to recite the ode again, her kind and considerate friends wouldn't hear of it on any account; and the refreshment room being thrown open, all the people who had ever been there before, scrambled in with all possible despatch —  Mrs. Leo Hunter's usual course of proceedings being, to issue cards for a hundred, and breakfast for fifty, or in other words to feed only the very particular lions, and let the smaller animals take care of themselves…

Mrs. Leo Hunter looked round her in triumph. Count Smorltork was busily engaged in taking notes of the contents of the dishes…
Chapter XV, The Pickwick Papers

Which – David promises – he’ll being doing tonight to regale you with on the morrow. “Taking notes of the contents of the dishes…”

David adds that tonight’s induction is a well nigh perfect out-at-this-end bookend. Because, in 1974 – yes, 41 years ago, the-far-end-bookend – he was the guest of honour and principal after dinner speaker at that year’s annual Dickens Pickwick Club Christmas Dinner. At, yes, the George & Vulture.

They’d tapped him on the strength of his being a leading young Dickens scholar – he was doing his Ph.D. on Dickens at University College London under the tutelage of the magisterial Victorian specialist John Sutherland.

Four decades and change on it’s been deemed that he’s earned his spurs. Not just Guest of Honour but the big one, the full honour – full membership in the Dickens Pickwick Club.

A made man. Count Smorltork.

Eat your heart out ghost of Tommy DeVito.