Walk of the Week: #London In Poetry 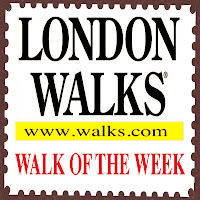 Every Sunday we’ll pluck just one walk from the vast London Walks
repertoire and put it centre stage.

Forty-three years in the making, this one. That's how long I (David) have been reading London poetry on a daily (well, near as dammit) basis.

This walk's a distillation of that reading, that learning, that love, that curating (and, yes, that university lecturing and guiding). It's significantly different from a "normal" London Walk.

It's about the poems, their character, their music, their whys and wherefores, their positioning, their places. With light guiding along the way. Say it again: the poems feature. It's their show. We're going to let them resonate, let them breathe – not "fit them in", not caulk the cracks of a normal walking tour with a few poems. So, yes, light guiding betwixt and between each venue.

And no, it's not just walking to various spots and spouting some poetry. There's "accompaniement" to these poems – I've (that word again) curated them. So, yes there'll be some gentle touches to the tiller when the poems make their appearance. But, bears repeating, it's their show – I'm just the window through which you'll see them, the walk's the thread along which they're strung.* What else? Well, it's certainly fair to say this one's a labour of love. Pretty much haemorhagging red ink on this walk because of "the handout." To wit: everybody on the walk will get a wonderful, substantial – and completely free – booklet of London poems. It runs to about 70 poems. It's very special. It's been privately printed (well, produced). A "limited edition." It's not for sale. It's not obtainable any other way. You, my poetry walkers that morning, will be the only people in the world who'll have a copy. It matches up favourably – it's better than – any existing anthology of London poetry. It's of course got the big hitters, the most famous London poems – the Blake, Wordsworth, etc. classics – but there are other poets and poems who will be a complete – and thrilling – revelation to you. They're in there because of the unique circumstances of this anthology – fitting poems to a London Walk and, the other side of that coin, fitting a walk to poems.

*Apply the Blue Plaque principle here. Blue plaques are wonderful. Be fun to do some magnetic resonance imaging of the brain when people see a blue plaque up ahead. Dollars to doughnuts it's some pleasure "node" of the brain that that sight stirs into actions. Neurons lighting up, all a-bloom all a-sudden. Because blue plaques say, "something special happened here" or "somebody special lived here." And the mental salivation starts. Well, in this instance, instead of a plaque it's a poem. And – let you in on a secret here – great poems do it better than plaque writers. Once you know that poem about the statue of Florence Nightingale, you'll never again see that statue in a ho hum way, never again not hear the "word". Here's the lines:

I almost love you, Miss Nightingale,
for going to war against war,
and when you came home to London
you cut through soaking red tape.

Or those two lines about the Great Stink of 1858

In that summer of egg-rotten air,
the river was a damp corpse...

Great poems – it's like great actors or great artists or great guides – you just let 'em get on with it.

Hope to see a few of you on Saturday, January 2nd. 10.45 am from St. James's ParkTube, the Broadway/Westminster Abbey exit.

You shouldn't have any problem spotting me. In addition to the finest walking stick in London I'll have a big roller bag (to carry the dozens of London Poetry books that rolled off the press a week or so ago).

The walk will end up near St. Martin in the Fields, in Trafalgar Square. Very near Charing Cross Station and Leiester Square Tube.