PHOTOGRAPHY: I loved this post on Creative Boom about shooting London with a fish eye lens… 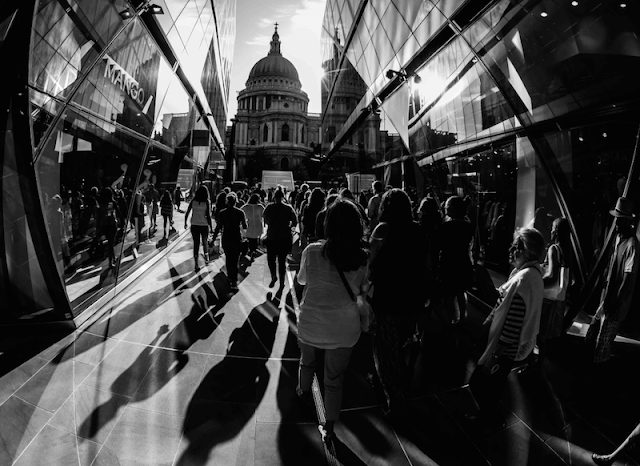 LONDON TAXIS: Mayoral hopeful George Galloway promised this week to "run Uber out of London". But his presence at the cab drivers' protest this week wasn't to everyone's liking…

Despite his promise of support for the taxi cause, Galloway's presence was not welcomed by the organisers of the demonstration. "We did not invite Mr Galloway," Trevor Merralls, campaign manager of the United Cabbies Group, told me after giving his own speech to the assembled cabbies. "We're politically neutral...this is not about who's the next mayor."

SAVE NORTON FOLGATE: The next step to save Norton Folgate from Boris's wrecking ball is underway. This letter was printed in The Times on Thursday…

To the Editor of The Times

We urge the Secretary of State, Greg Clark, to call in for his own determination – and hold a planning inquiry into – the British Land planning applications that are threatening the future of Norton Folgate in historic Spitalfields. This precious Conservation Area on the fringes of the City of London is under threat from plans by developer British Land to demolish a swathe of buildings for a banal office-led scheme. The plans were rejected by the democratically elected local Council, but this decision has been shamefully overruled by the Mayor of London, one of a string of permissions he has handed to developers against the will of local people and the mandate of local democracy.

Only a thorough public inquiry can determine the best outcome for this sensitive historic area. The Spitalfields Trust has commissioned its own scheme for the site from Burrell, Foley, Fischer Architects. This repairs and reuses the historic fabric, provides sensitive in-fill in keeping with the scale and character of the area as well as serving the interests of local businesses, particularly SMEs and micro enterprises, and the need for housing in the Borough.  It has been independently costed, is viable, and could be delivered immediately and speedily, for a fraction of the development cost.

• It's half term in London this week and we've been blogging about London Walks that are perfect for all the family… there's Street Art, Harry Potter & Ghosts for starters!

• Our regular Monday photoblog slot zeroed in on Bloomsbury and UCL

• On Wednesday we got up close and personal with Trafalgar Square

• Also on Wednesday we featured the ONLY theatre in London that can boast a built-in depiction of Shakespeare.

• And our Walk of the Week recommendation was for tomorrow's Doctor Who on Thames trip!

Comix Creatrix at The House of Illustration is one of those revelatory exhibitions where you find yourself standing there wondering: why didn't I know this already?

The role of women in illustration and cartooning is the theme of the exhibit – and there is a lot of fun to be had browsing the work. The bulk of the show focuses on the recent history of graphic storytelling as it has grown in the aftermath of 60's counterculture.

But the scope of the show – it reaches right back to the 18th century – places its theme powerfully in the broader context of historic gender equality issues. For what it's worth, in my time at the exhibition I heard THREE different couples say the same thing as they read about 18th Century caricaturist Mary Darly – "I had never heard of her".

This story of storytelling features beautiful artwork and great writing, but Comix Creatrix also packs a punch – a valuable salvo against the persistent Only-Princesses-And-Nurses presentation of cultural heritage.

A Tall Order Just Got EVEN Taller


A transgender woman from the Borders is aiming to raise £20,000 by completing a 32-mile walk wearing four inch high heels.

Jai Darra Latto, 22, is walking from her home village of Walkerburn, to Edinburgh Castle on Saturday, April 30.

She wants to raise the money for three lesbian, gay, bisexual and transgender (LGBT) charities.

Her cross-country walk - exactly 31.94 miles - will take her more than 10 hours to complete and she is planning three costume changes along the route.

Seen In London This Week 1…

Catch up with the entire Cartoon & Comic Book Tour of London on its own dedicated blog at cartoonandcomicbooklondon.blogspot.co.uk


Seen in London This Week 3…

On the day that The Independent, the newspaper of the liberal intelligentsia in the UK, announced that it was ceasing print after 30 years to go digital, David captured this shot in South Hampstead…


The generation game. On he day it's rumoured the #Independent's paper version is dying https://t.co/5ooFBUGF3J pic.twitter.com/LOcmjtT46m
— London Walks (@londonwalks) February 12, 2016

Don't forget that under 15's accompanied by parents go FREE on London Walks. It's Half Term in London this week and here's a special trailer for our London Walks ghost tours…

London Spy will return next Saturday, have a great London week!