#London Walks Questions: What Will I See On The Walk?

Hasn’t been done before. This.

So much for the drum roll.

We’re always being asked, “what will we see on this (or that) walk?” Headache of a question. Because if in reply we just rattle out a shopping list we’ve told you what you see. But not what you see. Because how you see what you see is, if anything, more important than what you see.

Case in point. I’m thinking of a lemony, creamy-coloured three storey Georgian house we look at on one of my walks. Now if by way of working our way through the shopping list answer to the “what will we see?” question we say, “you’ll see a creamy, lemony-coloured three-storey Georgian house” – well, that doesn’t begin to do justice to that brief stop on that walk. Doesn’t do the moment justice. Or the house.

Doesn’t do the moment or the house justice because the literal answer isn’t the half of it.

Which is by way of seeing you’ll also see a dreadnought being launched, and thirteen prime ministers, and a German ambassador with tears streaming down his face, and a kneeling, praying General Booth (of Salvation Army fame) in a train carriage, and Lord Tennyson giving a “private” reading of his great poem Maud, and a waltzing admiral, and a wedding register signed by four prime ministers, and the American actress Jean Harlow being put down SPECTACULARLY… Well, you get the idea.

So that’s why asking the question “what will we see?” is like leaping off the edge of the Grand Canyon and expecting to come down on the other side. You’re going to be disappointed.

The way you do leap off the edge – and get to the other side – and what a ride the trip over is – is to go on the walk.

Anyway, so much for “the dreaded question.” Here endeth the scene setter. 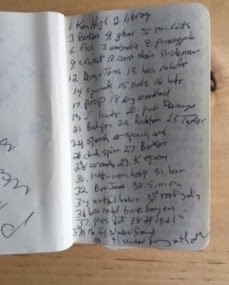 Here’s what’s not been done before.

Other day I counted up every single thing you literally see on my Kensington walk.

Let me – in the interests of full disclosure – elaborate on that.

On a fairly low key moment on that walk I say something like, “Ok, what I’m interested in here are the four houses in the middle of this row – 10, 12, 14, and 16 They’re 210 years old. They were originally artisans’ houses. The way you can tell is the flat front and the single window on each floor.”

I count that as three of the 180 visuals on that walk. The first of the three is what in the newsroom we used to call a gv  – a general view – of the row of houses. 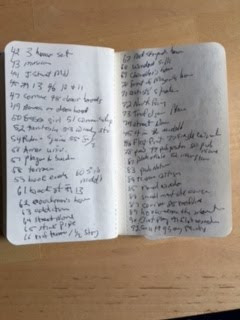 The second visual is “the flat front.”

The third visual is “the single window on each floor.”

I count that 25 seconds or so as three visuals because, like a film director, I’m directing my walkers’ view: gv, cu (close up), and different cu (close up).

That’s three things you see on that walk. Three out of the 180.

And that’s just the “out there” visuals. It leaves out entirely the “in there” – the mind’s eye – “visuals.” In this case the fact that those four sweet little houses have been completely gentrified – “there are no artisans living in this part of Kensington today.” And the connection with the original street name – a matter that evokes the Battle of Trafalgar and Admiral Nelson’s death and his funeral. It leaves out how those four houses are just one of several “pieces” that fit right into the demographic jigsaw puzzle of that neighbourhood in bygone times. Etc. etc. 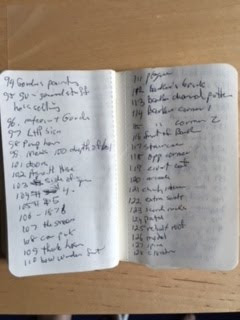 By yourself you wouldn’t be able to identify the pieces of the puzzle. Let alone put ‘em together and see the picture it brings up.

Let’s disport with some of the statistical possibilities.

Two a minute. One every 30 seconds.

My pedometer tells me that walk amounts to about 5,000 steps. That’s a different visual every 28 steps.

Walk down your hallway and count one step every time your right foot touches down. When you hit 14 right foot touch downs – that’s 28 steps – 14 with your right foot, 14 with your left foot. That’s not very far. One end of the hallway to the other. A different visual – something different to look at, something you’ve never seen before – every time you make the short trip down your hallway to open the front door and bring in the milk or the newspaper. And you’re making that trip 180 times in two hours.

And the 180 are just “the hard visuals” – what the eyes actually take in. 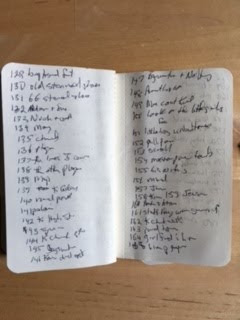 Leaves out entirely the “visuals” that are coming in your ears. The stories that light up, for example, a creamy, lemony-coloured three storey Georgian house.

Let alone the rest of the “plants” and “life forms” in that particular urban “rain forest.”

Bottom line. The question isn’t will there be enough there to see, to grab my attention and hold it?

The question is: is there too much? Are you going to be over-stimulated? You’re going to be taking on board – processing – a great deal of information.

If variety is the spice of life and seeing interesting stuff that you never would have laid eyes on otherwise is a nourisher par excellence… well, welcome to the banquet. 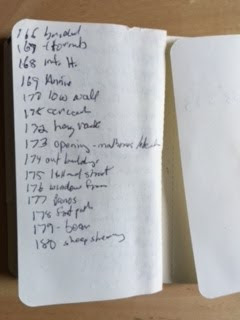