So You Think You Know Trafalgar Square?

The next of our In Focus London Walks goes this Saturday at 10:45 meeting at Embankment tube. Here's David with an in-depth preview… 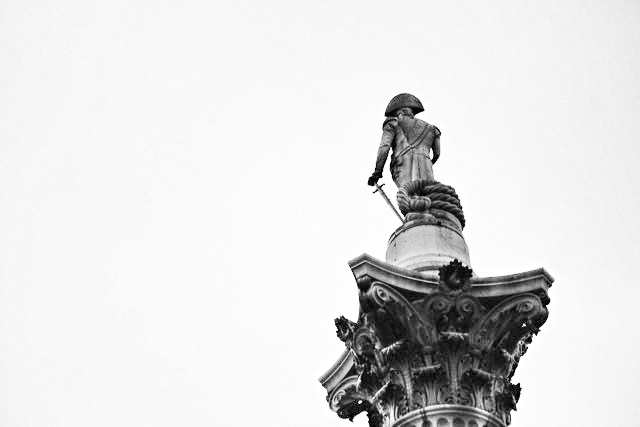 So you think you know Trafalgar Square?

For the first time in your life, get the blinders off – really see Trafalgar Square. That's when you'll know it.

Well, no need for that if you can spot the portable flogging and beheading kit without our help. And – in the back of your mind I hope – the pepper boxes without pepper that make you think of bird shit every time you look at a Rubens. And the death cart with the lawyer in it. The death cart carrying him to his beheading. And every inch of the way he's face to face with another head that didn't have a body attached to it. (It, the other head, was affixed to a pole secured to the cart – the pole, needless to say, positioned so the head was in the face of the condemned lawyer, leering and jiggling at him the whole way. Saying, "see me, this is you in 45 minutes.") And a headless woman with six children – "sandwich in her hand, no mouth to put it in" – and the culture-shifting importance of that moment for English literature. And the Roman officer who, drawing his sword to behead a beggar, changed his mind and decided to get a job as a saint. And the woman facing the firing squad. And cyphers and sea-shells and doggie paws and a nose. And how to "read" the architecture so everything locks into place like the lines of a sonnet. And the pyramid. And the measures. And the weighting allowance (and why it is where it is). And the vegetable cook. And what is it about those columns? And that "too warm work to last long" meant a warm body didn't last long. And the ghost ship in Trafalgar Square. And that Janus-face amazed by the company it's keeping – the less weird-witted survivors of a blurred time. And those that bareback rode the crest of untamed seas. And the statues...

OMG the statues. For starters, "the worst statue in England." And what about that scroll in his right hand? What's that mean? Any connection with the most famous pun in history? Which was? And two horses shot out from under him? And being left for dead on a battlefield? And a fool proof means of stopping sati in its tracks? (Sati – you know – burning widows to death on their husband's funeral pyre.) And banishing forever the moronic dismissal "what's that old 19th century fart got to do with me and my selfie times?" by hearing him say, "so perverse is mankind that every nationality prefers to be misgoverned by its own people than to be well ruled by another."

And over here, what about the supreme exemplar symbol of Christian militarism? Old Blood and Bones I mean, aka the First Gravedigger. Frowning under his beetle-brows, looking like Abe Lincoln dying of diarrhoea, with his mournful whiskers and bloodhound eyes. (Well, pre-John Wilkes Booth Abe Lincoln.) And being shipwrecked off Ceylon. And having his brother killed in that charge. And his baby girl burned to death. And having two horses shot out from under him. And losing his two old friends Broadfoot and Sale at Ferozeshahr. And, dying, saying to his son, "Harry, see how a Christian can die." And 30 years later son Harry being shot by an Afridi and bleeding to death on the north-west frontier of India. And having to deal with having talked Sale out of returning to Kabul where his, Sale's, wife and daughter and son-in-law were and how they were caught up in the massacre, the massacre that was to its day and age what 911 is to ours. A whole army and most of the camp followers – we're talking 16,000 people – wiped out. Well, not quite the whole army. One badly wounded surgeon got out, made it back – a sabre slicing off the top of his head, the normally fatal slash having been slightly deflected by a copy of Blackwell's Magazine he'd put in his hat to guard against the cold. In the event it guarded against something else. But go ahead – well, Fiona will go ahead – make the connection with Sherlock Holmes.

And you don't want to get to know this man? And his times? What, are you as pig ignorant as Ken Livingstone? Cut from the same cloth as those Americans who called themselves Know Nothings and were proud of it?

Look at the statue and then look at each other with a wild surmise, ladies and gentlemen. How weird is it, the British public's strange attraction for religious generals? And what does a name tell us? And an article of clothing? Yes, that's right looking at these statues we're looking under the bonnet, seeing into some of the innermost recesses of a time and a culture, seeing their workings.

Anything to add? Oh, for sure. This one's got a superstar guide. Fiona. Last year's winner of the Guide of the Year Award.

Any downside? Just this. The next time you're in Trafalgar Square with a pal you're going to be a handful. "Oh, look at this. And that. Did you know? Get a load of this. How amazing is that?"

Better allow a lot more time. You and your pal aren't going to be whizzing through Trafalgar Square the way everybody else does. You'll be the only ones there with your eyes open. Everybody else, well they might look like they've got their peepers open – but that's an, er, optical illusion. For all they're seeing they could be right out of The Night of the Living Dead.

And there, in a nutshell – well, in a few hundred words – you have the plat of an IN-FOCUS walk. They're a really close look – a fine-tooth combing, a richly rewarding look – of a single famous London street or square. That's the two-sentence short version.

For the long version, click here (it's a description of the Parliament Square IN-FOCUS walk but said discussion is accompanied by a really detailed explanation of IN-FOCUS walks generally, what they do, why their hour has come round now, etc.).

Fiona, a descendant of John of Gaunt, won the 2015 Guide of the Year Award. She's got a trophy case of awards and professional qualifications: Blue Badge, City of London Badge, Westminster Badge. Anything else? Thought you'd never ask. She's an actress who also teaches juggling, circus skills and escapology (she made a famous break from the London Dungeon).

From The Daily Constitutional Archive: Five Trips To Trafalgar Square

The Great London Songs – I Live In Trafalgar Square – March 2013

The Passion in Trafalgar Square – April 2015

The Opposite Of Napoleon! October 2015