#London Walk of The Week: City of Money & The Crash

The City Of Money & the Crash

A plunge into the darkness and swirling fog. No, not Victorian London. Our London. Or rather, their London. The London of the wolves of Threadneedle Street and Lombard Street. Financial London. The Wall Street of Europe London. And darkness and swirling fog because – well, do you really know what a hedge fund is? Or a derivative? Or short-selling? Or how the stock market works? Do you really know What. Money. Really. Is. And how it shapes the world. No? Well, it just might behove you to do so. Behove you to do so because ostriching it – "nothing to do with me" – won't get you off the hook. Off "their" hook. In short, this London – Money London – has everything to do with your life. So let's go see these places.** And more importantly, let's go see into*** them.

*For the record, the walk was originally subtitled: Coming Across. We picked that subtitle because the City makes us all "come across". But also of course because of what we come across – what we happen on to, discover. And, yes, the suggestion that the walk runs counter to – or cuts across – the usual official, anodyne, window dressing palavver about the City and its doings. And, finally, the mark of Zorro (so to speak) that Richard'sacross all of that: Knows. What. Money. Really. Is. Knows how it works. Knows its subterfuges.

**A sampler: Wren's gateway, the high-tech home of the Stock Exchange, Goldsmiths' Hall, the ancient home of the Corporation of London and its beautiful Wren church...

***"Chapter headings" include: Why did a hurricane sweep in from those far flung South Seas? How did a medieval order of knights become the first international bankers? Peek-a-boo it's the home of the masters of the universe and more than one US Treasury Secretary. Lessons in finance from George Soros. Learning how to break the British pound and make a billion. Where the ‘Thundering Herd’ rode their luck over a cliff.  John Law’s amazing philosopher’s stone, which he created thanks to the Chinese.

Last point: if this walk were a sword it'd be made of the finest Toledo steel. Ice-brook tempered. Which is by way of saying, this one hasn't been whipped up just like that. A great deal has gone into it – and it's been honed for years. For example, some of the steel in the blade has come from Richard's book, Who Cares? Or Why War, Poverty, Environmental Destruction and Debt Are So Popular. 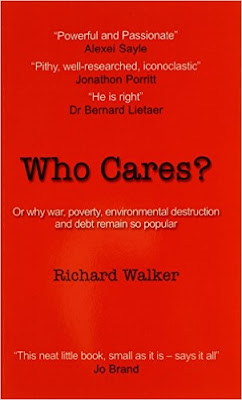 Some of it's come from the hugely popular walk the Occupy group conducted two years ago. Elements of it have come from thinkers ranging from Adam Smith and David Ricardo to Friedrich Hayek and Joseph Stizlitz. And all of it's been sharpened – for years – by arguably the finest mind on the team.

To go on The City of Money walk meet Richard just outside exit 2 of St. Paul's Tube. The walk ends near Bank Tube.

Email ThisBlogThis!Share to TwitterShare to FacebookShare to Pinterest
Labels: City of London, City of Money & the Crash, Richard Walker