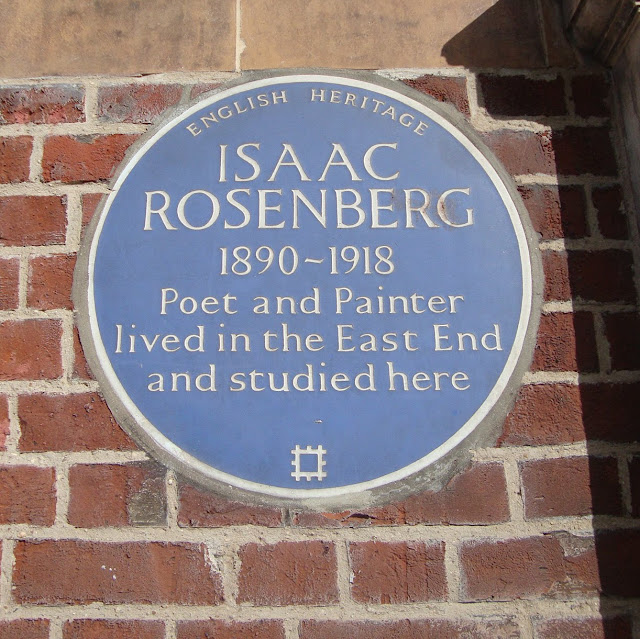 Hailed by many as the greatest of all the War Poets Isaac Rosenberg was born in 1890 to Lithuanian-Jewish immigrant parents and was raised and schooled in London’s East End. The building that has the honour of bearing his Blue Plaque was once the Whitechapel Library. Nicknamed the University of the Ghetto it was where Rosenberg and numberless others of the Jewish immigrant community studied and took shelter from the privations of immigrant home life. Of the Whitechapel Library, Rosenberg once wrote the lines:


How often I went for warmth and a doze
The newspaper room whilst the world outside froze,
And I took out my sardine sandwich feast
Whitechapel Library, Aldgate East
And the trams and the madman and the chattering crone
The smell of their farts could turn you to stone
But anywhere, anywhere, was better than home


Having been critical of the war in his poetry, Rosenberg enlisted in 1915. He served as a Private (he turned down the opportunity of a stripe – promotion to Lance Corporal) with both the 12th Suffolk Folk Regiment and the King's Own Royal Lancaster Regiment. He lost his life on the Western Front in April 1918.

Keep an eye out for this plaque with Harry on the Unknown East End walk every Sunday at 2.00p.m.