There he goes, nose-in-a-book as usual. London Walks Pen & Daily Constitutional Special Correspondent David Tucker looks up for a moment to muse on poetry, poets and London… 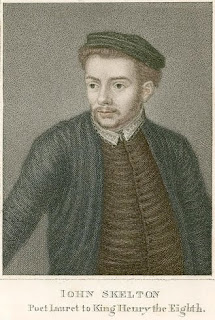 Poetry. Sometimes it’s just one line that gets its hook into you.

Hooks you and you stay hooked.

This line by John Skelton, for example.

(Yeah, I know – who’s John Skelton? He was Henry VIII’s tutor. Was born about 1460. Died 1529. So, born into and formative years annealed by the Wars of the Roses era. Oxbridge – the word couldn’t be more mot juste – i.e. it looks as though Skelton attended both universities. [Aside here: been there, done that, got the tee-shirts myself – and I did it, not a little proud of this, simultaneously; though they – the universities – were on the other side of the Atlantic; and, yup, I aced them both. In some ways I suppose it was like keeping a wife going in one city and a mistress in another. Did I just say that?] The last great poet of Catholic England. The first important poet whose career coincided with printing. Well, you get the idea.)

No, I haven’t forgotten “that” line. It’s this:

“God  maketh his habytacion” in poets.

The barb in the hook is that John Skeleton is buried before the high altar in St. Margaret’s Westminster.

So he’s making his habytacion in God’s crib.

St. Margaret’s figures in my Thursday Old Westminster walk. Which I share with Shaughan. We take turns.

How could it not? It’s the parish church of the House of Commons. Walter Raleigh – well, most* of Walter Raleigh – is buried there. The House trooped over there on VE Day for a Thanksgiving service. It’s got the Milton window. Milton’s second wife and daughter are buried in the churchyard. As is Caxton – the first printer in this country, so there they are, Skelton and Caxton, keeping company in and just outside God’s house. Henry VIII’s mother, Elizabeth of York, is in the big house (Westminster Abbey) – so you’ve got the good old English pecking order put on show in habytacions. The greatest pornographer who ever lived – well, the most literary pornographer who ever lived – John Cleland, author of Fanny Hill, is another permanent guest there at God’s hang out, God’s habytacion (St. Margaret’s, that is).

And that’s not to mention its – St. Margaret’s – snake eye and bob tail wagon (which you ain’t never gonna spot unless you’ve got me along for the ride).

*Most of Sir Walter Raleigh. I.E., neck down. His upper storey is elsewhere.