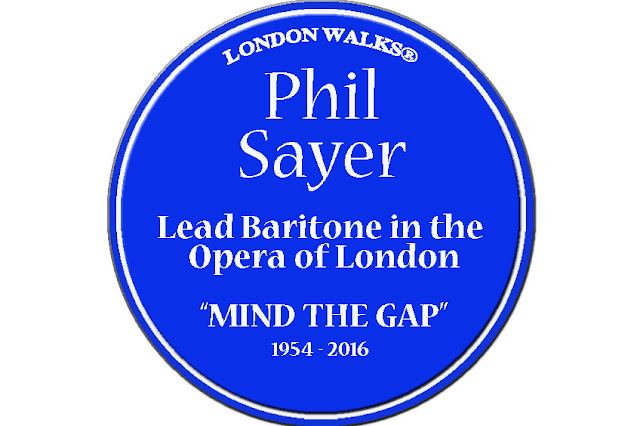 And all of us saying, wistfully, sadly, a fond farewell to Phil this week.

Sometimes – as another great Londoner once said – there’s a world in a grain of sand.

That announcement – Phil Sayers saying that – is a grain of sand.  And there’s a world in it. Our world. Our London world.

Hearing the news of Phil Sayers’ untimely death – he was only 62 – gave pause. Made me mind the gap.

Brought to the front of my mind what surely was always there in the back. What is it about that phrase – and that warm, gentle, “ordinary” voice giving voice to it the way he does? (Does. Did. It’s always the verbs that get you when someone you know – or felt you knew – dies. The verb shift, simultaneously abrupt and fumbling – “the Present latching its postern behind Phil’s tremulous stay” – it’s like a tomato plant being violently yanked from the earth, roots and all.)

So what is it about Mind the Gap?

I know what it is now. A man’s death was the catalytic agent that clarified it for me.

Mind the Gap crystallises for me a great deal of what I love about these people, this culture and this capital city.

Mind the Gap. It’s not a barked command. It’s not jack boots. It’s not strident. It’s not stern. It doesn’t threaten or rebuke. It’s not glowering. It’s not hysterical. It’s not cold and metallic. It’s not got a pointed gun at the end of it. It’s not severe. (If you’re seeing national stereotypes in any of this, well, that’s down to you. I didn’t say anything.)

Mind the Gap. It’s the gentlest of imperatives. A kindly, gentle reminder rather than a barked order. It’s calm. It’s civilised (indeed, almost soothing). It’s that rare thing – a recorded announcement that’s got some genuine warmth in it. It’s economical. It gives you credit for some intelligence. It’s friendly. There’s almost an implied four letter word tagging along at the end of it: Mind the Gap mate.

I especially like the first word: Mind. There are so many ways that’s right. The obvious one being that this place, London, is all about mind. Quickness of mind. London doesn’t have rich natural resources. Londoners have always lived by their wits. Mind here is supremely important. And, yes, there’s always a gap, a dislocation between the ideal and the real in London.

Mind the Gap. We, as Londoners, do. We’re forever mindful of it.

And  that’s just for starters. Mind is the verb. It says to me I’ve got a mind. It’s one mind crossing the, yes, gap to another mind. It’s wonderfully polite. The OED defines it “take care to remember”, “bear in mind.” It just doesn’t get any more kindly, more civilised than that.

Splendidly it was Shakespeare who first used the word in a sense that’s near enough to the sense the Phil Sayers phrase intends: An unfilled space or interval; a blank or deficiency; a break in continuity…

The Shakespeare usage is in Macbeth  (1623) iii. i. 12  If he had beene forgotten, It had bene as a gap in our great Feast. It’s Macbeth talking about the missing Banquo.

Phil Sayers’ death is a gap in our great Feast.

Or this, also from the OED. It’s Charles Kingsley: His death is to me a great sorrow—a gap in my life which I feel and cannot fill.

And the resonances of Phil Sayers’ very name. It’s not just that Phil is friendly and informal – it’s that its Greek root is “love” – philanthropy, for example, to promote the welfare of others.

It’s just the most wonderful cluster of associations.

Phil Sayers has this day gone to the undiscovered country from whose bourn no traveller returns.
Mind the Gap, Phil.

Our plaque (pictured above) comes from yesterday's post in The Missing Plaques of Old London Town series - catch up with it HERE.

In honour of Mr Sayers we have postponed our regular London Spy London Review. It will return next Saturday.