Our new Rolling Stones in London Walk launches on 5th May. I'll be discussing the Stones' first album today on the Rock'n'Roll London tour.

It's odd to think now that the album would have seemed like something of a hotchpotch to the ear of the blues purist way back in 1964. 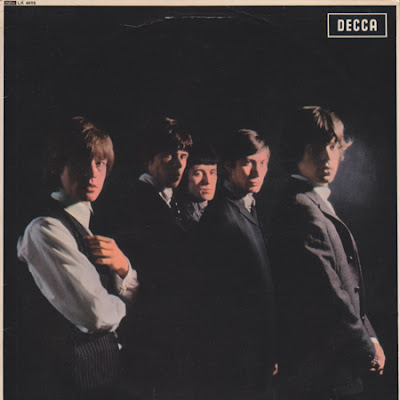 There's a bit of Motown in there (Can I Get a Witness by Holland, Dozier and Holland). Chuck Berry's Carol - a great version here, my favourite of all Stones versions of Berry's work. Berry divided opinion at the time, with some hardcore blues fans calling his blues credentials into question. The opener, Bobby Troupe's Route 66 had first been recorded back in '46 by the Nat King Cole trio. Bo Diddley's shuffling Mona nestles beside Rufus Thomas's comedy number Walking the Dog. There's a frankly frenetic take on Willie Dixon's I Just Want To Make Love To You.

For five callow Englishmen from London, Kent and Cheltenham who'd only ever seen America at the pictures, I think they make a pretty good fist of the whole affair. Jagger is on fine, louche, slack-jawed form, drawling the vocals of his black heroes with all his might. Not bad going for a skinny-assed LSE student from Dartford. The guitar interplay between Brian Jones and Keith Richards is particularly noteworthy. Their two pronged attack was worked up over long hours nose-to-nose with guitars in their squalid Edith Grove digs, a location so vividly recreated in Exhibitionism at the Saatchi Gallery.

In common with the debut albums of Dylan - Bob Dylan (1962) – and The Beatles with Please Please Me (1963), the Stones' first long-player is a cornucopia of musical influences. Dylan draws upon the likes of Bukka White and Blind Lemon Jefferson, and his material ranges from trad folk to gospel numbers; the Beatles' first record parades Brill Building pop (Goffin & King), with show tunes and Burt Bacharach.

Taken together the three debuts of the major 60s acts – three albums that are often dismissed by the critics as rather lightweight – document the starting point of the rock age, the battle plan for the next 30 years.

The three albums always remind me of my favourite line in The Beatles Anthology series of documentaries - an insightful quote from McCartney. "It's hard," he says, "to imagine a time when Rock'n'Roll was just one of the musics."

Not so hard when you go back to these great records – all the influences are there. And it's all up for grabs – soul, blues, gospel, show tunes, country, folk. It's the optimism of these records that grabs me every time – young boys with the world at their feet immersing themselves in the music of other ages, other countries, other ethnicities. This last being most important of all.

By the end of the rock age – and only the most deluded of fans would deny that the period is now surely over – the culture would have shifted, and rightly so. In terms of the record business, the popular music that sells best today is no longer white music for white people influenced by black music: it is black music for everyone. The long process of change starts here with Dylan, The Beatles and The Rolling Stones.

The Rock'n'Roll London walk is ONLY London Walk with its own dedicated comic book! Written by Rock'n'Roll London guide (and Daily Constitutional editor Adam) you can buy a print or digital copy at the London Bookstore online: londonbookstore.myshopify.com