DC Editor Adam writes… During Music Month I'm collecting London music to shape The Big London Playlist. Get in touch with your faves!

To claim such internationally respected musical figures as Yehudi Menuhin and Stephane Grappelli for London alone would be parochial at best. But both men have strong London connections of which London music fans should be justly proud.

The great French violinist Stéphane Grappelli lived in London during the Second World War. He was playing in London with the Quintet du Hot Club de France when war broke and took up residence here while his Hot Club colleague guitarist Django Reinhardt returned home. The two would not play together again until 1945. 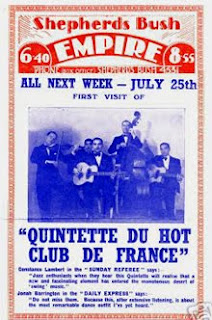 It was during this period in London that a Battersea-born piano player made his debut in Grappelli's band, one George Shearing. Shearing went on to become one of the jazz greats.

New York-born violin legend Yehudi Menuhin – whose centenary we are celebrating 2016 – made his first concerto recording here in London for the HMV label in 1931. Menuhin lived in Highgate – at No.2 The Grove – for more than 20 years (when he left in 1983, he sold the house to Sting).

The joyful, genre-busting collaborations between Menuhin and Grappelli, so lovingly anthologised on the 4-CD collection Menuhin & Grappelli: Friends In Music, include the Grappelli-composed number Highgate Village…