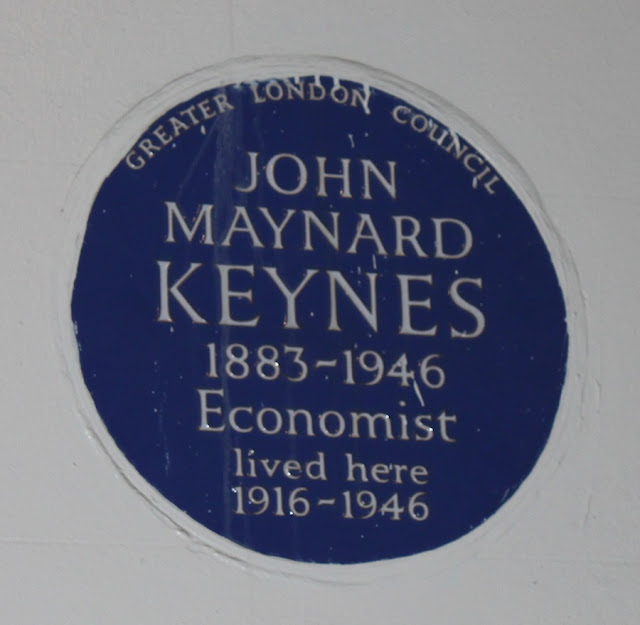 A great honour indeed, to have a Blue Plaque. Almost as great, perhaps, as glowing words such as these in one’s Times obituary:

“There is the man himself – radiant, brilliant, effervescent, gay, full of impish jokes... He was a humane man genuinely devoted to the cause of the common good.”

In terms of economics, we still live in his shadow even now in the early 21st century. Of all the cast of characters listed over an again in the cast list of the opera that is the current fiscal climate, Keynes is constantly invoked – as a solution by some, as part of the problem by others.

As a man of the political centre, Keynes advocated active policy decisions on behalf of the public sector or state to shore up the perceived inefficiencies of the private sector. As such, Keynes is often attacked from both right and left, while being advocated equally by both sides (he was, for example, cited as an influence by both George W. Bush and Gordon Brown).

His plaque can be found in Gordon Square, Bloomsbury on the house in which he lived from 1916 – 1946. Part of the celebrated Bloomsbury set, his homosexuality was accepted in their liberal circle although he did marry in 1925, the Russian ballerina Lydia Lopokova.

A lifelong member of the Liberal Party, and a greatly influential on their economic policies, Keynes was called upon to take high office on a number of occasions, but always turned the opportunity down.