Last week on The Daily Constitutional, David posted on the 4th July to mark Independence Day. You can catch up with the full post here.

Part of the post prompted a response from London Walker and Daily Constitutionalist Livio Broccolino of Baltimore, Maryland USA.


Just up Whitehall is that magnificent statue of Ulsterman Alan Brooke. First Viscount Alan Brooke, Chief of the Imperial General Staff in World War II. His ancestor – nobody does the British military number better than Ulstermen – Sir Arthur Brooke took command of that War of 1812 British expedition when the torcher of DC, General Robert Ross (another Anglo-Irish military Brit), was killed a couple of weeks later attacking Baltimore. An American sniper put a bullet through General Ross’s right arm and into his chest. That was a day before the bombardment of Fort McHenry, which gave us of course the U.S. National Anthem.


As a subscriber to London Daily Constitutional and a fan of London Walks (I take them whenever in London) I read your [4th of July] posting with great interest.

I am also a resident of Baltimore where poor General Ross met his end.

According to local lore he was felled by two teenage militiamen: Daniel Wells and Henry McComas. I've attached a photo of the monument erected in their honor. 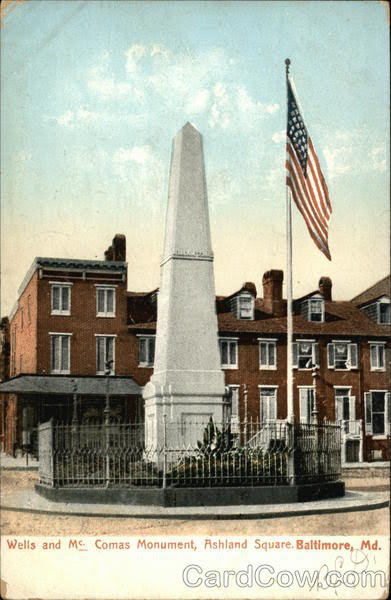 The monument still stands and the boys (killed immediately after Ross was shot) are buried beneath it.  The surrounding neighborhood is not quite so charming today.  Their deed is also commemorated by a Wells Street and a McComas St and in a relief on Baltimore's Battle Monument – erected just a few years after the battle.

Revisionist historians have called the story into question but the town clings doggedly to their traditional heroes.

I hope this is of some interest to you.

All the best,
Livio Broccolino

Thanks Livio, that certainly WAS of interest to us and I'm sure that many of our Daily Constitutionalists will echo my sentiment.

Your email has given me an idea – if are there any other Daily Constitutionalists and London Walkers out there who would like to "guide" us around a notable spot in their hometown, just as Livio has done with this wonderful post, then DROP US A LINE at the usual address.