Knock Knock. Who's There?

We “read” our London, our time.

They “read” their London, their time.

The fun thing – the essential* thing – as a guide (and as a bright, curious, savvy, switched-on, really into-it walker) is for us to be able to “read” their London, their time as well as ours.

The London, the time of those who went before. The London of past Londoners.

It’s having history sense. Like journalists having news sense. You have to have it to do the job properly.

So how did the 392 million Londoners who went before us “read” their London, their time?

Well, take livery companies, for example. They go back to the Middle Ages. They were trade associations. They set wages, set prices, assured standards, etc.

They were called livery companies because members wore a distinctive livery (or uniform). So just as we can instantly tell that a copper’s a copper (unless he’s a plainclothes detective) by his uniform and badge and helmet back then Londoners could tell who was a Goldsmith or a Stationer or a Mercer or a Broderer by their apparel, their livery. 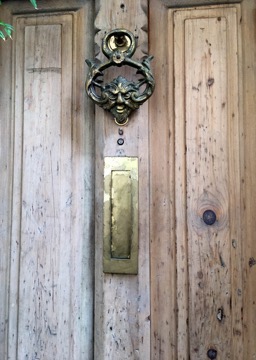 He has a cameo role on my (David’s) Hampstead Walk.

Samuel Morse (of all people – yes, that Samuel Morse, the Morse Code Samuel Morse) made this auditory and sociological “observation” not long after he pitched up here. (Morse, like me, was an American.)

It’s fascinating in and of itself. But what makes it especially so is that Morse was across it just like that. In short, it’s that super sensitive ear of his doing its thing. Doing a sort of prototype Morse Code thing – dot dot dot dash dash dash – with London door knockers.

Here’s what Morse noted. And heard. And twigged.

“There is a singular custom with respect to knocking at the doors of houses here which is strictly adhered to. A servant belonging to the house rings the bell only; a strange servant knocks once; a market man or woman knocks once and rings; the penny post knocks twice; and a gentleman or lady half a dozen quick knocks, or any number over two. A nobleman generally knocks eight or ten times very loud.”

Your mouth hanging open? Mine was when I first came across this one. It’s a world in a grain of sand. Social rank. Privilege. Knowing your place. The done thing. Etc. etc. It’s all there.

To say nothing of the inmates of the house being able to “read” the knock at the door. They had a much better idea – a much fuller picture – who it was out there who’d come calling than we do when our door bell rings.

Age cannot wither her, nor custom stale her infinite variety.

*Well, one of the “essential” things. Having a well-stocked mind won’t do it all by itself. You have to be able to edit. And deliver (voice, timing, presence, etc.) Most everybody can do it sort of – the way everybody can dance or sing. Very few can do it brilliantly. The few who can – well, their shining livery is the London Walks imprimatur, being a London Walks guide.

Many come knocking, few are admitted.