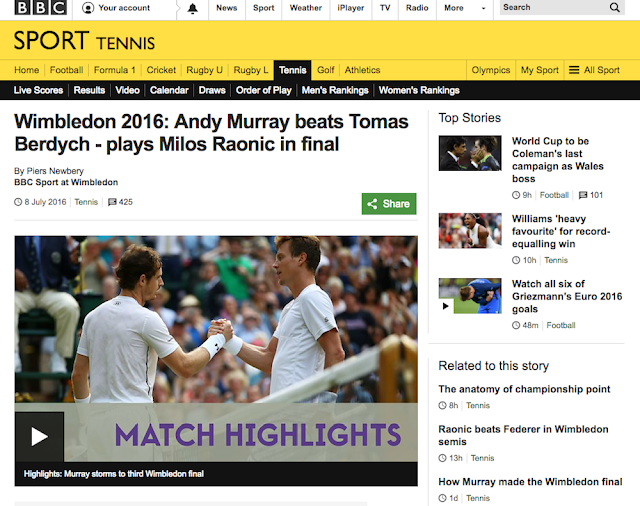 "Obviously to make a Wimbledon final is a good achievement and I've got one more to go on Sunday," Murray told BBC Sport.

"The older you get, you never know how many chances you're going to get to play in a Grand Slam final. I'm glad I managed to get through today.

"You learn from those matches for sure, those experiences in the past have helped me a lot, playing against some of the best players of all time." 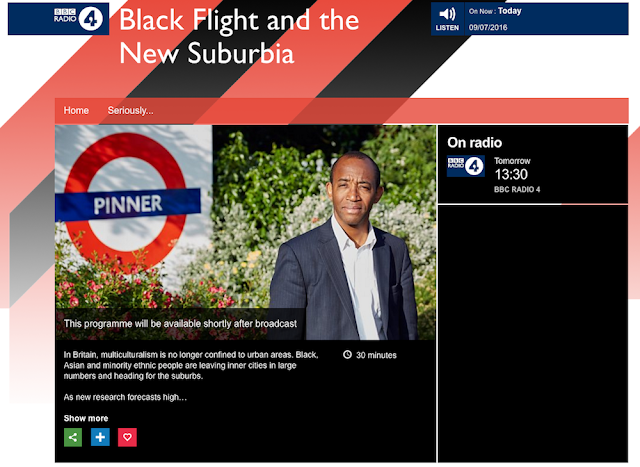 John Betjeman would have spotted it immediately, for it is via the former poet laureate and his celebrated 1973 BBC documentary Metroland that the traditional perception of the English suburbs has been formed. On a gentle jaunt, in his gentle way, he described communities stretching from Neasden in north-west London all the way to the Chiltern Hills, along the path of the Metropolitan underground line. Betjeman’s suburbia spoke of cricket pitches, golf clubs, women’s institutes and verdant farmland: a new life for indigenous Britons at arm’s length from the bustle and smoke of London.

But that journey retraced, as I have been doing for a BBC radio documentary, reveals a very different Metroland. “Funeral from Harrow draws the train,” wrote Betjeman. “On, on north westwards, London far away.” Harrow then, according to the 1971 census, had an Asian population of about 8,000 from a total population of 200,000. A further 1,500 settled there after Idi Amin’s mass expulsions from Uganda in 1972. Today, 31% of the residents there describe themselves as white-British; 69% are ethnic minorities. Betjeman’s Pinner, where he saw “sepia views of leafy lanes”, is much changed too. In 1971 there were fewer than 1,000 visible minorities. Pinner’s population of 19,000 is now 38% ethnic minority.

Hugh Muir, who wrote the piece, presents Black Flight & the New Suburbia on BBC Radio 4 this Sunday afternoon at 1:30pm. The programme will be available on Listen Again to UK listeners just after broadcast:  http://www.bbc.co.uk/programmes/b07jwt5s

COFFEE: For many Londoners Bar Italia is still the best cup o' coffee in town and it's celebrating 67 years trading… 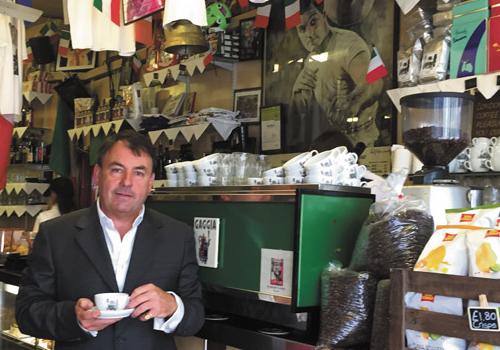 The café, which was opened by Antonio’s grandparents Lou and Caterina Polledri in 1949, has many iconic features and even more claims to fame. The clock above the door, which Antonio says still tells good time, the stone floor that was put down 67 years ago by Antonio’s uncle Torino Polledri, a terrazzo floor specialist and, perhaps most notable, the poster of boxer Rocky Marciano which Antonio says was a gift from the former heavyweight world champion’s wife Barbara after he died in 1969 – it was to say thank you to Antonio’s father Nino for looking after Rocky when he visited London, and making sure he got his “favourite Italian foods which were polenta and risotto”.

WINE: New Wines From London's Only Winery – Get West London

CLUB CULTURE: The WAG Club In the 80s – The Guardian

The Best of The Daily Constitutional This Week…


On the 4th July I posted a Five London Yanks photoblog… 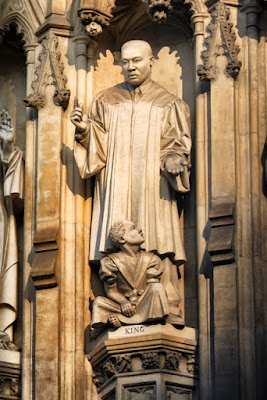 When I (David) guide there (Whitehall/Downing Street), as a Yank I sometimes say “we Americans educated the builder of your (Brits’) Downing Street. You returned the favour by burning down our White House (and capitol, etc.).” In the War of 1812.

But wheels within wheels. Canada Day and all that. The burning of Washington DC (and indeed flying the Union flag over the place, if only for a day) was in “payment” for the Americans’ destruction of the Parliament buildings and other public buildings in York, the provincial capital of Upper Canada.

And it’s surely worth mentioning that the 18th-century Zippo-wielding British forces in DC made a point of only “doing” the public buildings. Didn’t so much as strike a match agin any private houses or property. Think of the Colonel Bat Guano/coke machine moment – “that’s private property” – in Kubrick’s great ode to geo-political/MAD (Mutually Assured Destruction)-military insanity, Dr. Strangelove.


On Tuesday, as part of the #plaque366 project, I shared this plaque from Wandsworth… 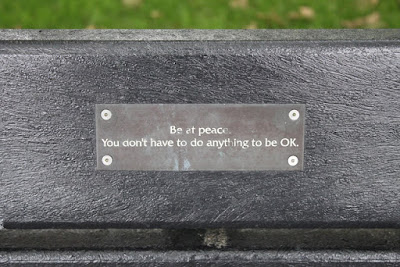 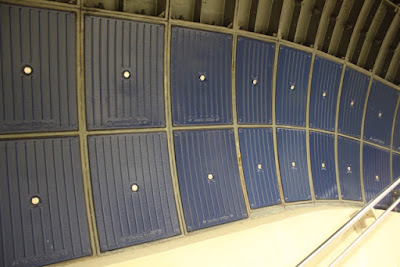 On Thursday I blogged from Edinburgh… 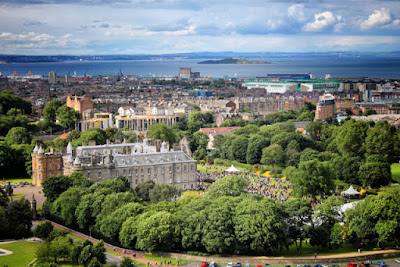 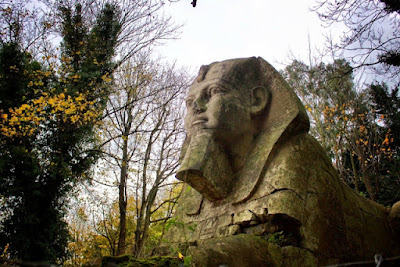 Now this is just weird. Money for old… shoes?

Emma, who runs the money blog Aldi to Harrods , is a shoe selling pro, and has made over £2,000 doing it. She told us: “I stumbled across someone selling their old, smelly shoes on eBay back in 2011 and I knew that I had to give it a try!

“I list my old shoes that aren’t any good to a charity shop and not only have I made £2,000 in cash, I’ve had almost £500 worth of gifts bought for me by happy customers.”

If you want to see how much people are selling their old shoes on eBay for, there’s a nifty trick. Search for something along the lines of “trashed shoes”, then on the left hand side, under the title “Show only”, tick “Sold listings”. This will bring up all trashed shoes that have been sold, and the price they were sold as.

Full story in The Daily Mirror

Careful how you walk out there…

When scientists ask people to evaluate others based on the way they walk, there are a few standard answers people give.

Loose gait: must be an adventurous extrovert. Clipped shuffle: must be neurotic.

But scientists say those personality judgments are generally wrong.

The only thing that current research suggests we can accurately predict from someone's walk is how vulnerable they are. That's a scary idea, suggesting that our thoughts and feelings are perhaps more visible than we'd like them to be.

Recent evidence of that phenomenon comes from a 2013 study that found prison inmates who scored high on measures of psychopathy could pick out people who'd been victimized in the past, based partly on their walk.

Heard in London This Week… 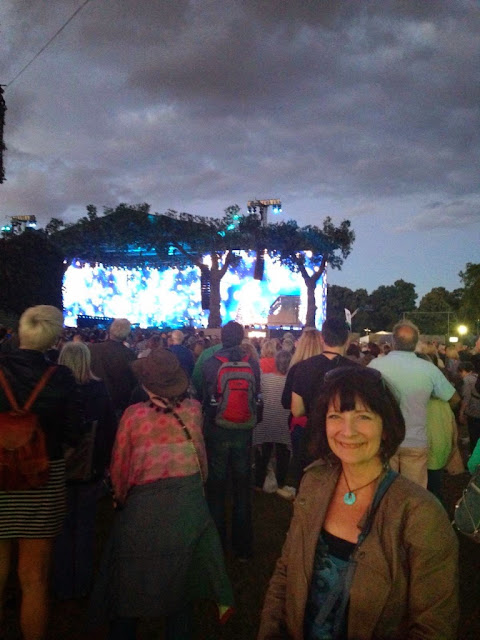 LW's Karen (above) saw Carole King in concert at Hyde Park last Sunday. Over to Karen…

Was moved to tears as Carole King sang the album that soothed me through the heartache and elation of my teens and early 20's - Today it's still the album I reach for when I'm down and troubled and need some loving care. Thank you, Carole King for the gift of Tapestry. 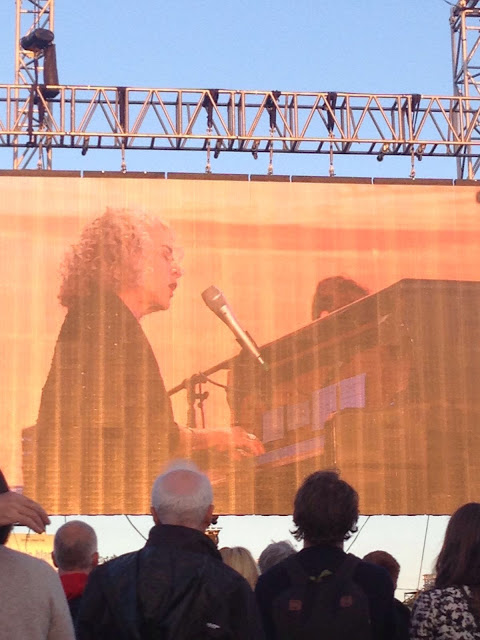 Oh I do like a pet pic. I was particularly impressed by this Kensington dog last Thursday… 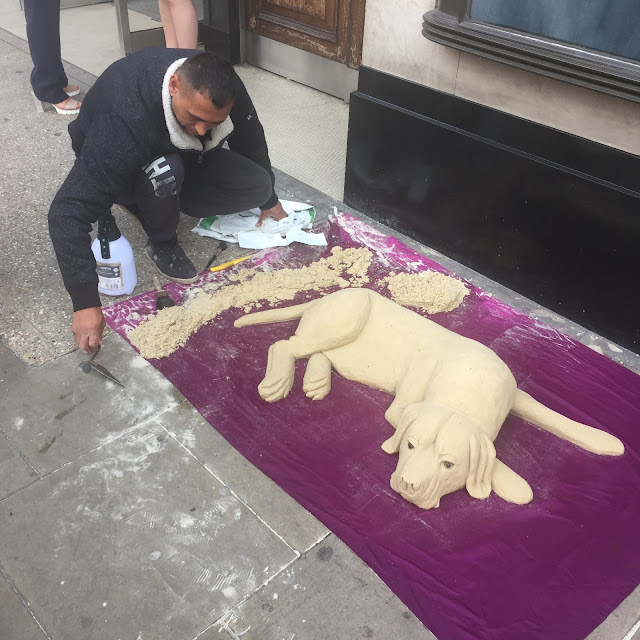 Dare I dream? As I blog this, Andy Murray has made his third Wimbledon final. As he takes to Centre Court tomorrow, I will be leading the Unknown East End tour so will miss all the action.

Will there be a repeat of the famous scoreboard pictured below (any excuse to post that pic!)? 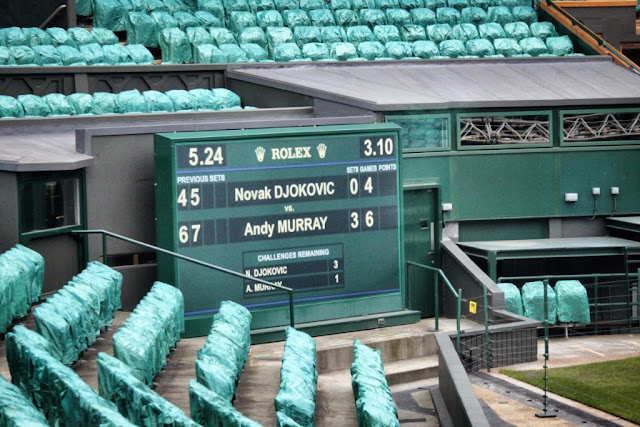 The London Spy slot will now begin its annual sabbatical and will return in September. Have a great summer all!