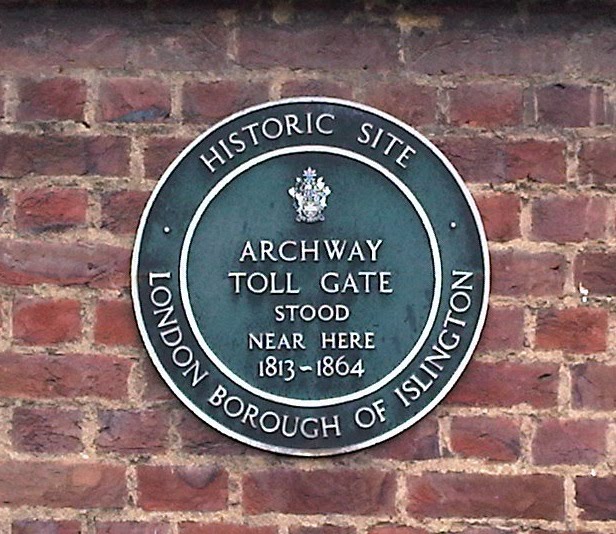 There’s nothing new under the sun. Before we had the Congestion Charge in London, we paid for the road through a series of Toll Gates and Turnpikes. Most of them were abolished in the 19th Century, but many have left their fingerprints on the map – Turnpike Lane being the clearest example.

The plaque pictured here marks the spot of the old Archway Toll Gate, operational from 1813 to 1864. The plaque's location is commentworthy given that it is attached to an otherwise anonymous block of flats just underneath someone’s kitchen window. Blink and you really would miss it.

It is said that it was from what is now modern-day Archway that Dick Whittington heard the Bow Bells and “turned again” back to London. The Kinks used the Archway Tavern on the sleeve of their Muswell Hillbillies album. Rod Stewart was also born in the neighbourhood

The titular Archway was (and, indeed is) the bridge that spans the road hewn out of Highgate Hill. The road – a roaring highway along which our plaque can be found – was the second solution for extending communications northward. The first plan had been a great tunnel, so as to avoid the complications of building a road on the steep slope. The road was only brought into being after the repeated collapses which lead to the abandonment of the proposed tunnel.