#plaque366 The Battle of #CableStreet

Eighty years to the day since Oswald Mosley and his British Union of Fascists were told, loud and clear" "They shall not pass!"

The ‘No’ was to Oswald Mosley, leader of the British Union of Fascists, who wanted to march his troops through the heart of the Jewish East End to frighten the residents. Mosley saw himself as a potential fascist dictator to rank alongside Mussolini and Franco, but he wasn’t manic enough to plan a coup. Instead he and his Blackshirts dealt in low-level violence and intimidation.

That summer of 1936 fascist supporters boarded buses in east London throwing off those they suspected of being Jewish. They sent letters to Jewish MPs and councillors explaining how ‘each of you has a lamppost ready and waiting’. BUF members would walk into Jewish-run shops and announce: ‘This won’t be your shop for long. It will soon be ours.’ They announced the march for October the 4th. It would stop at four designated points throughout the East End to rally support, the biggest show of strength the fascists could muster. The Jews were worried that the march would be followed by a pogrom. The communists, with one eye on the Spanish Civil War, which had recently begun, wanted to prevent the fascists organising to gain support. Labour Party leader Clement Atlee warned the authorities that the march would lead to much bloodshed, and urged a ban. The Met drafted 6,000 police officers into the area.

Mosley’s Bentley arrived at Tower Hill at lunchtime on the Sunday and set off for Cable Street. Violence followed, there were mass arrests, the fascists were humiliated. 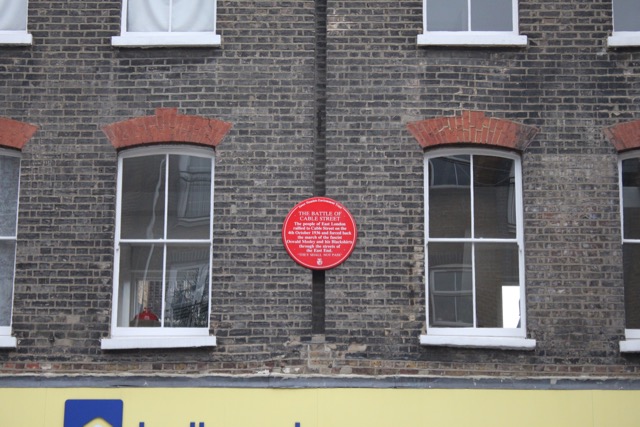