Only Four More Chances to Catch The #RollingStones #London Walk! 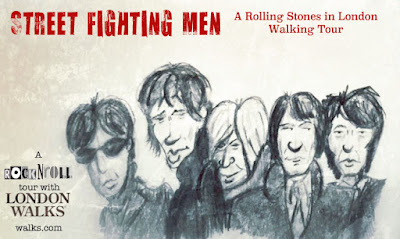 The Rolling Stones London Walk has been going since May this year every Thursday at 2.30pm.

Along the way Richard and I have met some fantastic people, from hardcore Stones buffs to London Walkers looking to "complete their collection" of London Walks tours.

Unlike the career of The World's Greatest Rock'n'Roll Band, however, the Rolling Stones London Walk is soon drawing to a close.

From a blogging point of view, I've really enjoyed writing about The Stones over the past few months. I've covered their blockbusting museum show Exhibitionism (opening in NYC this November - don't miss it!), taken a long look at their first single as well as their Denmark Street-made first album.

I've also had a lot of fun compiling playlists to accompany the tour. You can catch up with five of those below.

And don't forget, you can still book a private Rolling Stones tour for your party or special occasion. Might make a nice Christmas present for the grumpy old fart in your life! Find out how to book a private tour HERE.


Hope you enjoy the playlists!

The Stones & Chuck Berry – The Master's originals alongside the Stones' covers…


Stones v.s Beatles! Contrast and compare the two greatest 60s bands on a level playing field – the songs they covered in common, the artists both bands loved, and George vs. Brian on sitar!