By a quirk of the calendar and rota, it turns out that I'm leading the Ghosts of the old City walk at Hogmanay (New Year's Eve) for the second year in a row.


Last year, as I had a coffee before the walk started, I blogged the following post (below) from Paternoster Square in honour of my countryman and colleague Graham.

We Scots believe that Hogmanay is a powerfully mystic time of year - so perhaps it's more than a coincidence that I'm leading Graham's old walk for the second year at year's end.

In that spirit, it would be tempting fate not to reblog my tribute to my late colleague…

Politician Willie Ross once pronounced: "The Scots are a disputatious people."

It is a line beloved of Scots everywhere (your correspondent particularly). It even features in an episode of The Simpsons - Principal Skinner describes Groundskeeper Willie as disputatious, at which Willie barks: "You just made an enemy for life!"

Especially at Hogmanay - the Scots word for New Year.

At New Year we "first foot" our friends and neighbours - visit their homes after the stroke of midnight bearing gifts - a lump of coal for the fire and a slab of black bun (dense fruit cake) are the traditional gifts. To arrive empty handed is to bring certain misfortune upon the head of your host for the duration of the year ahead. Similarly, if the first foot - the first person to step over the threshold in the New Year - is fair-haired, then disaster will surely befall the household.

At Hogmanay the ghosts crowd around in the words of the old songs, in the tall tales and, most of all, in the "presence" of our absent friends.

You can see it in our writers, too. Conan Doyle's flirtation with spiritualism is surely a good example. Burns's epic Tam O'Shanter, the poem in which the drunk and randy Tam is chased by demons when he gatecrashes their evil midnight rites at auld Alloway Kirk. Robert Louis Stevenson's "fine bogie tale" Jekyll and Hyde continues to fascinate. The devil himself is central to my all-time favourite work of Scots literature, The Private Memoirs & Confessions of a Justified Sinner (1824) by James Hogg.

In about an hour I'll be leading my final Ghosts of the Old a City tour of 2015. The last outing for this ghost tour before Hogmanay. I'll spend two hours spinning yarns, calling up the spirits, waving my arms like a broken helicopter and generally bulging my eyes like Fraser out of Dad's Army.

Subtle it is not. And I love every minute of it.

But as the walk starts, the absent friends will already begin to assemble for the Hogmanay revels. And first among them will be the man who taught me this walk, my late colleague, my countryman, my friend, Graham.

Graham trod this beat on a Tuesday night for many a year before passing on the mantel to this grateful guide a few years ago. He was tired of leading London Walks at nighttime but carried on his daytime tours for a good few years after this. I was always happy to have inherited this walk from Graham in such circumstances.

Graham passed away earlier this year (2015).

Graham was always a dapper fellow, always wore a tie. And so tonight, in tribute, I'll break my usual habit and do likewise... 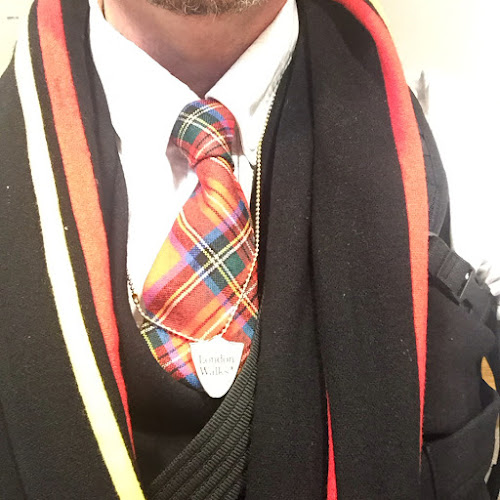 Okay, Graham's knot would NEVER have been as slovenly as mine, but I hope it's the thought that counts.

So here I go, a Scot following in the footsteps of a Scot, following a long line of Scots revelling in the telling of fine bogie tales and calling up demons in the very shadow of the church - not Alloway this time, but St Paul's - as my countrymen are wont to do. We're aye whaur extremes meet, to paraphrase the great Hugh MacDiarmid, and the meeting point of the pious and the profane is always a happy hunting ground for the Scots storyteller.

Thanks for the walk, Graham, and a Happy New Year to you. I'll be at the Old Bailey not a minute later than 8:30pm. I'm delighted to know you'll be looking on and checking your watch.