#London Walk of the Week: A Secret Ceremony with @kpgtourguide Rescheduled!

Invitation to a Secret Ceremony

THIS IS THE RE-SCHEDULED TOUR FROM 29TH NOVEMBER! 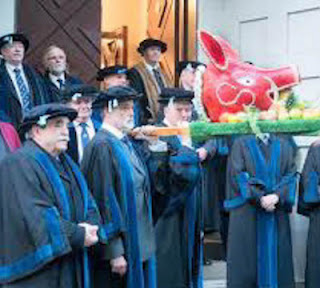 Robes. Regalia. A boar's head on a stretcher. A procession. The Lord Mayor. The Mansion House. The Butcher's Hall.

Yes, that's right. We're heading far (enough) from the madding crowd. Maybe 30 visitors – out of the 30 million who visit London annually – will see the ceremony we're going to see. See the ceremony, the ceremonial procession Karen's going to guide. (If you're with us that makes you one in a million – that's bragging rights; that's seeing something 29,999,970 people don't get to see.)

And that's by way of saying, this one emphatically isn't a ceremony for tourists* – it's a ceremony for the ancient body that carries it out. It's about them and their "custom of immemorial usage in the City" – it's not about tourists. It's a procession and a guard of honour and robes and furred gowns and gold chains and badges of office and, above all, a boar's head on a stretcher. It's intimate and strange and rivetting. And – into the bargain – it's a whole lot more than a "mere" spectacle. Because if you don't understand London Livery Companies and ancient London offices and time-honoured ways of doing things you don't understand London. And that's the world – its own world – that Karen will open up for you – that you'll have a grasp of, will understand come walk's end on December 13, 2016. That's the payoff, the return.** That's what comes of Karen's prepping you for the procession itself.

Last word: really really special two hours, this. "The world's greatest guide" – in Travel and Leisure's estimation – taking you through the intricacies of a centuries-old London ceremony. Taking you to a ringside seat. Does it get any better than that?

And as long as we're at it, let's hear it from the world's greatest guide: "Here's a thrilling alternative to the switching on of the Oxford street lights (yawn): the quaint and whimsical Boar's Head ceremony that is still performed annually by one of the oldest Livery Companies in the City of London. Resplendent in fur-trimmed robes, members of the Butcher's Company solemnly process to Mansion House, the Lord Mayor's official home. They come bearing gifts. Well, one very special Yuletide gift. In pride of place in the procession: the Boar's Head, which will subsequently be at the head of the table – the place of honour – at their festive feast. A feast that can be traced back to 1343. Now that's what I call a real tradition..."

*In marked contrast to the Changing of the Guard, that quintessence of touristy London. The Ch of the G's the vin ordinaire of London tourist fare. The hordes are welcome to it. Today at any rate. We won't be there, er, swilling that (in). We're uncorking Chateau Lafite.

**That and the photographs you'll get – so whatever you do DON'T leave your camera behind and DO make sure the battery's charged and you've got a spare.


Invitation to a Secret Ceremony 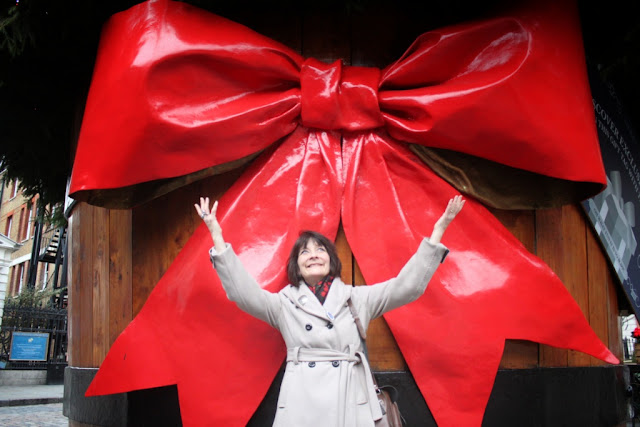 Karen comes trailing clouds of glory. Travel & Leisure crowned her "the world's greatest tour guide." She hosts the Canadian television travel show "London Next Stop." She won the London Tourist Board's Guide of the Year award. She's the author of Royal London. She is, quite simply, a star turn – which is why she's the "go to" London guide for every major media concern. A reformed actress and occasional journalist, she was Independent Magazine's Cultural Heritage Correspondent. Her gold standard walks are, needless to say, vivid and entertaining. So: "World's greatest tour guide", CBC star, Guide of the Year – no way she wasn't going to front the London Walks film.