My regular Friday afternoon Rock'n'Roll London walk goes ahead as usual today at 2pm. I'll be dealing with all the usual suspects and taking requests as usual. But the FOCUS of today's tour will be David Bowie… 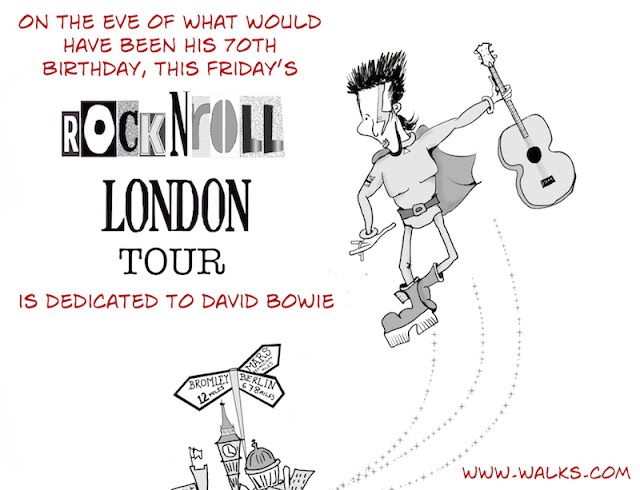 One of my favourite areas of the Rock'n'Roll London tour is always the "pre-history" of David Bowie – the years before Ziggy when the plain old Jones boy was finding his way.

It's not a period that has gained many critical plaudits and even hardcore Bowie acolytes often view it has having little more than curio value. But for me it holds a continuing fascination - not merely because we can see within the songs and the image-changes the seeds of the 70s superstar to come. It's a period when Jones/Bowie belonged to London. He was London's secret and his work is a mirror to the city at the time.

If you're unfamiliar with the period, here's my "Best Of" playlist featuring 10 Bowie tracks recorded between 1964 and 1969. Track 10 is, of course, very famous – Space Oddity, year zero for most Bowie fans. And I've left out The Laughing Gnome (although I think it a fine example of the whimsy of 67) in favour of its B-side, The Gospel According to Tony Day - a taut, quasi-blues with an almost thuggish vocal delivery from Bowie.

If I only had to pick one of the tracks, it would be The London Boys, an achingly beautiful song that has gone on to become something of a London gay anthem. I'd go so far as to include this among the top ten tracks of Bowie's entire career.

Here's the trailer for the tour…