This Friday's Rock & Roll #London Walk is Dedicated to #DavidBowie

This Friday's Rock'n'Roll London Walk is dedicated to David Bowie. 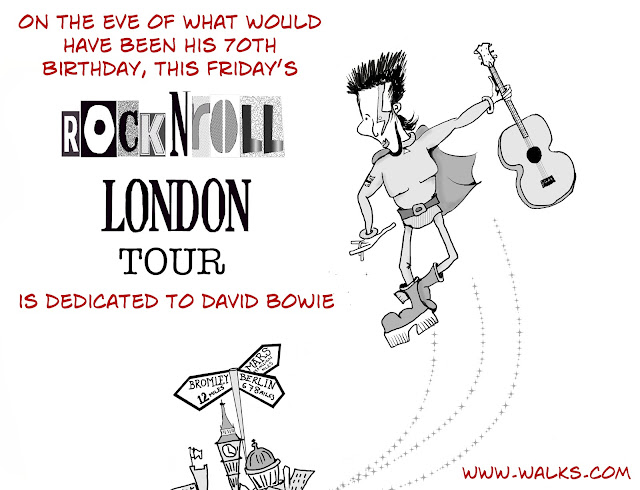 Last year, on the 8th January, I blogged the following…

The 8th January is always a BIG day in the Rock'n'Roll calendar. On this day in 1935, Elvis Presley was born in Tupelo, Mississippi.

In terms of the Rock'n'Roll London walk today, Elvis is always present, although he never once set foot in our city.

I have almost forgiven him.

Bowie, on the other hand, enlivens the proceedings at several points along the route being one of our beloved London Boys, to borrow from one of my all time favourite of his numbers…


Bowie's London period – broadly '64 to '73, from the 45 Liza Jane to the album Pin-Ups – remains the era of greatest personal fascination for me as a fan. The man himself seems to have little time for the 60's section of his career but I love the journey aspect – the evolution from R&B combo front-man through Anthony Newley-influenced solo star, to the cosmicly-permed Space Oddity "novelty act" and on to Ziggy – as well as a lot of the much neglected music.


The walk took place and we had a lovely time. A week later I found myself writing this…


One week ago today, on this blog, I wished David Bowie a Happy 69th birthday.

That afternoon I fronted the Rock'n'Roll London Walk – I say fronted because there's almost always a degree of "collaboration" on that walk – I'm the front man but you guys, the London Walkers, are the bass players, the guitarists, the drummers, the Theremin players, harmonicas, handclaps and backing singers. You always have something to add – music fans (my favourite people) can't help but share their opinions.

A week ago today, standing in Denmark Street, we ruminated on Bowie's ability not just to reinvent himself but to seemingly appear and disappear at will. We agreed that it was thrilling when he tip-toed up behind us in 2013 with an unexpected new album, seemingly out-of-the-blue. Keeping such a huge project under wraps in the information age was (and remains) an astonishing coup de teatre.

Why had he been away so long, we speculated? One journalist described his period of absence, between 2003's Reality and The Next Day in 2013 as "suspended animation" – we are seldom far from a sci-fi analogy with Bowie even 47 years after Major Tom. I always thought that, like Lennon between '75 and '80, he was being a stay-at-home dad. Not very glam for The Man Who Fell To Earth, and an insufficient "explanation" for many, especially on slow news days. His distance was tantalising. The less visible he was, the bigger he became.

There were rumours of illness. But isn't the world of show business in a constant fog of hearsay and speculation about such matters?

So, as a group last Friday, we dismissed the idea – he looked so good, a picture of health – and agreed that we couldn't wait to hear the new record, released that very day.

A week on, as the tributes flowed – even the Archbishop of Canterbury chimed in – I read musician and producer Brian Eno's words with a sense of wonder.

"David’s death came as a complete surprise, as did nearly everything else about him," Eno said, adding, "I feel a huge gap now."

His old friend, his comrade in arms, a fellow old soldier of the Glam revolution, himself a towering figure of modern music, was as thrilled in the presence of Bowie as the rest of us.

Even Brian Eno was a fan.

Which brings me to what I love about the Rock'n'Roll London Walk. Sure, we're nerds – I'm past caring and wear my nerdy-ness as a badge of honour as I shuffle down Denmark Street saying, "This is where it all began!" But what are we actually looking for?

I can tell you what we're not looking AT:

We don't usually do Ionic columns, rustication or Le Corboussier and the brutalist movement. Don't get me wrong, I CAN if it's required - one of my favourite bits of the walk is my architectural "read" of the old Saville Theatre. But this tour is more about people than buildings.

What we are looking for is something of the essence of the musicians.

Okay, it's vague. Maybe it's airy-fairy. It's as hippie dippy as Kooks on Bowie's Hunky Dory album…

But we DO find it. Every single time.

It's not in the bricks and mortar. It's in the shared experience of music fans, coming together on the walking tour, just like they did when they bought the records, when they went to the gigs. It's a communal celebration.

In pop and rock the art is complete only when it's put before an audience. And when the fans – fans from me to Brian Eno to London Walkers – share their experiences with each other, that's where we find the essence of the star in its richest form.

And why do we want this essence? We want it because it tells us we are part of something bigger than us.

And who gave it best? David Bowie, of course. Bowie was always in character. When he came before us, he was always performing, always "on". Being "David Bowie". He didn't do "backstage" – the soap opera of celebrity, the court cases, the divorces, he didn't launch his own-brand sausages. When he was in the public eye he gave of himself 100% and what he gave was always in service of his music.

Over the course of 2016 I have chatted with countless Bowie fans along the route of the Rock'n'Roll London Walk and, a year on, disbelief is the overriding emotion.

On a couple of memorable occasions there have been tears.

It's been an extraordinary year for music fans.

Friday's Rock'n'Roll London Walk will go ahead as usual – we'll deal with all our favourites from the Stones to the Pistols and beyond. But our special guest star will be David Bowie and the tour will end in a pilgrimage to Heddon Street… 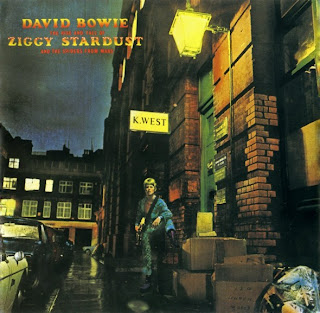 I hope you can join me.