A Daughter of the Disappeared: David Tucker Looks at The #JackTheRipper Case 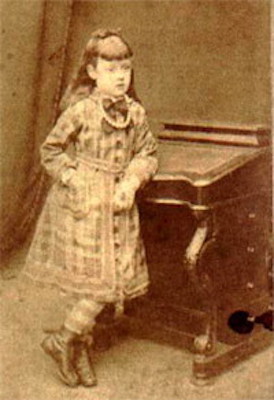 Can we think about this little girl for a minute?

What’s this photo telling us? She’s well turned out, this child. Her hair carefully, lovingly groomed. Her outfit won’t have been cheap. Those bloomers match the dress. The shoes are handsome. And she’s not meanly accessorised, what with that necklace and the big bow tie.

And even having the photograph taken. The parents of this child weren’t dirt poor. If they weren’t middle – and in fact they weren’t – they were certainly aspirational middle. There’s love and pride in the photo. And a measure of assurance, of confidence – it’s there in her outfit, her pose, in the solidity of that made-to-last-an-eternity desk. This is an image that proclaims things are going to be all right.

Things weren’t going to be all right.

The little girl will be dead in a matter of months.  Meningitis. Her baby brother John was born disabled.

Her parents’ marriage has just a couple of years to go.

The photograph was probably taken in Windsor. There’s more than a whiff of Windsor about it.

When Emily Ruth – the little girl – dies in 1882 both parents start drinking. Heavily.  The loss of their lovely daughter, their two-year-old son with the disability. He’ll be in a charity school when his mother dies. Annie Georgina, the middle child, will be 15 and with a circus in France when her mother dies. When did she find out about her mother’s death? Who told her? How did she take it? What did she think? Was there even one day over the course of the rest of her life that she didn’t think about it? Did she tell anyone?

Emily Ruth’s parents separated in 1884. In 1886 Emily Ruth’s mother is in Whitechapel, the worst slum in Europe. Windsor to Whitechapel. Her husband sends her ten shillings a week for a few months. And then that stops. It stops because he’s died of “alcolhol-related causes.”

Emily Ruth’s mother is down and out. She earns a pittance crocheting and selling antimacassars. And selling flowers.

And selling her 47-year-old body.

Emily Ruth’s mother is of course Annie Chapman, Jack the Ripper’s second victim. Her life, her world, her memories, her everything – her being – will contract to that ghastly little back yard at 29 Hanbury Street. And then to what that knife did to her at dawn – dawn – on September 8, 1888.

Why tell  – well, retell in the case of Annie – the story? Why show the photograph?

Here’s why? The tale is “normally” so lopsided. About the victims and the suspects and what happened.

The light it shines is so powerful – it turns our staring eyes into horror shows – we forget or can’t see what’s outside that concentration camp searchlight beam.

Which is why it’s so wrenching – so unsettling – to see this photograph of Emily Ruth Chapman. It’s a reminder that her mother, Annie Chapman, was so much more than the “role” cruel fate dealt her.

Looking at that photograph and following even a few of the penumbra rays coming out from it – well, it’s chastening, poignant, heart-breaking.

I don’t think about Jack the Ripper very much – I haven’t personally guided the walk in years – but when I do think about it I make sure I don’t go where the black hole would take my every thought, my every response. I don’t just think about the “executions” – about the executioner and the executed – I also think about the living. Living but on Death Row. Emily Ruth’s 15-year-old sister with the circus in France. Or Inspector Joseph Luniss Chandler of H Division, the first policeman on the scene. For some time now I’ve known where he lived. Have thought a lot about him going home that day, to his wife and three sons, 12, 10 and 8. Did Martha, his wife, see it on his face when he came home? Did he tell her that night, knowing it’d be all over the newspapers soon enough. And his boys, did he ever tell them? What did he tell them?

There’s the real and the story. They’re never congruent, never one and the same thing. We’re lucky to get just the story. Annie Georgina Chapman and Inspector Lumiss and his family got the real. There but for the grace of God…

Been nerving myself to go over there one day and look at Inspector Chandler’s house. Perhaps try to get a feel for the way the prison shades must have closed in on that house, on their lives.

And wonder how in the world they dealt with it.

Maybe Emily Ruth was the lucky one.