Friday Is Rock'n'Roll London Day: #PinkFloyd at The V&A @V_and_A Their Mortal Remains


Ever since David Bowie Is… at the V&A in 2013, there is a sense that we are in something of a golden age for music-related museum shows.

Last year's Rolling Stones show at the Saatchi was a killer. And with yesterday's news from the press launch at the V&A for the Pink Floyd exhibition, Their Mortal Remains (opening 13th May 2017), it looks like the trend is set to continue.

Yesterday's publicity event was full of exciting announcements – not least that the UFO Club, the Tottenham Court Road venue where the Floyd became the de facto house band of the underground scene here in the capital, is to be recreated for the show.

I was personally very pleased to hear that entry to the exhibition space will be through a replica of the battered old Bedford van in which the young Floyd toured the country. Why so pleased? Because the van makes a cameo appearance in my Rock & Roll London Comic Book starring Pink Floyd… 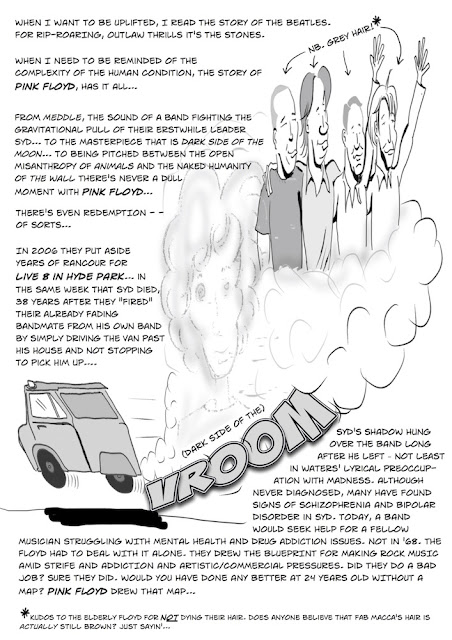 The page above is taken from the free six-page sample download of the Pink Floyd Rock'n'Roll London Comic. You can download it HERE.

On the 17th June I'm leading The Pink Floyd London Walk - a walking tour of Pink Floyd's London which ends at The V&A where the exhibition is taking place.

The Facebook page for the tour is here: www.facebook.com/events

You can book ahead for Their Mortal Remains at The V&A here: www.vam.ac.uk

Here's the trailer for the tour…

The Rock'n'Roll London walk is ONLY London Walk with its own dedicated comic book! Written by Rock'n'Roll London guide (and Daily Constitutional editor) Adam it's available in both print & digital formats at the London Bookstore online: londonbookstore.myshopify.com