It's completely against the point of this blog concerned with walking London to tell you that you should stay in and watch the telly. But just this once I'm going to make an exception.

I've blogged about the book before, a few years ago when I added it to The Daily Constitutional London Reading List. Here's the post, first published in March 2015…


As a Londoner Len Deighton always gives the Big Smoke a leading role in his works. Whether it’s in his anti-Bond spy novels told by a nameless narrator (“Harry Palmer” in the movies, The Ipcress File, etc) or his highly personal and utterly fascinating work of non-fiction London Dossier (1967), the capital always features as a character in her own right.


In SS-GB, his “alternative history” novel set in 1941, London is seen as never before – or rather, as never was. And it is a chilling view.


The SS is in residence at Scotland Yard; King George is in the Tower; Churchill has been executed. London is in ruins. And the details in the bomb-blasted backdrop are vivid and startling to any Londoner.


In one scene, our hero, D.I Archer (now in the employ of the SS) takes a short cut into Soho through the wreckage of the Palace Theatre – meanwhile, the Metropole music hall on the Edgware Road is still standing. In perhaps the most delicious detail, Archer drives both ways along the (now strictly one-way) Tottenham Court Road.


These snapshots of an alternative London leap out of a characteristically compelling Deighton narrative, buttressed by his trademark meticulous period research. A great thriller and a most memorable London novel.


I added Ian Fleming's Moonraker to my Daily Constitutional reading list earlier in this series (Ed's note Feb 2017 click HERE for that post), and a jolly good read Fleming's spy-sci-fi tale is, too. I notice that Fleming's Bond novels are now published as Penguin Modern Classics. For all the fun of the Bond books, Fleming was, to my eye, rather a clodhopping writer and I can only assume that this "classic" status is a marketing ploy to exploit a devoted following of Bond fans.


Fleming isn't half the thriller writer that Deighton is, and has none of his wit. Deighton may not have gone to the same school as the Prime Minister, (Ed's note Feb 2017: This was first posted when old Etonian David Cameron lived at No.10) and so perhaps lacks acolytes in the world of publishing to put his case for for "classic edition" status. But he remains a living London treasure and, to this correspondent, one of the very best thriller writer these islands have yet produced.

(The edition shown is the 1980 Panther paperback.)


I'm greatly looking forward to the TV version tonight. I wonder if they will recreate the scene from the Palace Theatre mentioned above? I love the Palace and the scene has always stayed with me. If they don't, there's still some pretty harrowing looking London scenes in the pre-publicity. Just take a look at the trailer…


Or how about this still…? 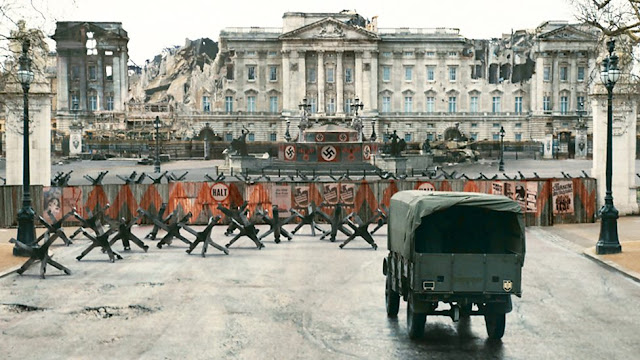 There's an excellent piece on the BBC website all about the making of the show:  www.bbc.co.uk/programmes/articles

If you like the first episode of SS-GB - it airs tonight Sunday 19th February at 9pm on BBC One – then you really should head for the excellent Über - a comic book alternative history of WWII which features vivid scenes of a London laid waste. Kieron Gillen is the writer with Canaan White and Daniel Gete illustrating. I blogged about that book in previous blog posts, catch up with them HERE and HERE.