Here's the first of many contributions from David Tucker to make the Top 50. David, as you know, is not only a London Walks guide, he's The Overlord of the walks.com website, Composer of the Famous White Leaflet and the Special Correspondent of The Daily Constitutional. This post was first published on 25th March 2009 and finds him on typically forensic linguistic form…

Covered in dust and radiating enthusiasm, David emerges from the vast library at London Walks Towers with an invitation to join him on his Shakespeare's and Dickens' Old City Walk…

“This field commonly called West Smithfield, was for many years called Ruffians hall, by reason it was the usual place of Frayes and common fighting, during the time that Sword and Buckler were in use. When every Servingman, from the base to the best, carried a Buckler at his backe, which hung by the hilt or pommel of his Sword which hung before him. This manner of fight was frequent with all men, until the fight of rapier and dagger tooke place and then suddenly the generall quarrel of fighting abated which began about the 20. yeare of Queen Elizabeth, for until then it was usuall to have frayes, fights, and Quarells, upon the Sundays and Holidayes; sometimes twenty thirty and forty Swords and Bucklers, halfe against halfe, as well by quarells of appointment as by chance."

The name ‘Smithfield’ is a corruption of ‘the smooth field’ and because it was ‘smooth’ and just north of the ‘New Gate’ knights jousted here (ergo the name Giltspur Street); and the Peasants’ Rebellion climaxing here in 1381; and William Wallace (illustrated) being hanged, drawn and quartered here in 1305; and the first Protestant martyrs being burned to death at the stake in 1554; and the World War I shrapnel damage. All good London history-at-the-boil stuff. But as a guide I want to drill down deeper. So there’s the above para – not from Stow’s well-known Survey of London and Westminster (1598), but from his all but forgotten Annales, or a General Chronicle of England (1580).’ 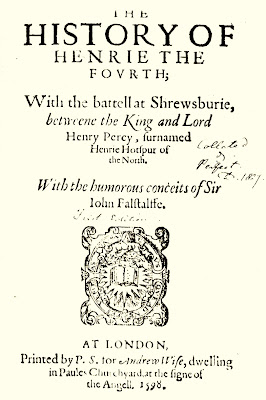 What I like about the extract from John Stow’s Annales  is the way it scalpels through a curtain on the past – opening up to view “Frayes” and “common fighting”. And more. The more being the most exquisite social nuance: Stow recalls ‘the time that Sword and Buckler were in use’. It ‘abated’ Stow tells us ‘about the 20 yeare of Queen Elizabeth[‘s reign]’ – i.e., 1578. And the reason? A foreign fashion, natch. The rapier – introduced of course from Italy. Suddenly sword and buckler fencing was for yobs, for Elizabethan chavs, for ‘Ruffians’. The sword-and-buckler up against the rapier in the Elizabethan status wars – it was a hopeless mismatch. Like pitting a Ford Escort against a Lamborghini.

And sure enough, it illuminates a Shakespearean moment: Hotspur's sneering put-down of Prince Hal: ‘that same sword-and-buckler Prince of Wales’ (in the first Act of I Henry IV) – the subtext of which is, to put it bluntly, ‘that common little shit’.

The unusual capitalisations – Ruffians, Frayes, Servingman, Buckler, etc. – are also very much to a Shakespearean “point”. But you’ll have to come on my walk to find out how and why.”