Mapping The City of #London

This one, courtesy of London Walks Pen & Daily Constitutional Special Correspondent David Tucker first posted on 9th July 2014, looks at how very different the City of London could have been…


Walking in the City of London? These two maps will “prep” you very nicely.

Starting with this one. 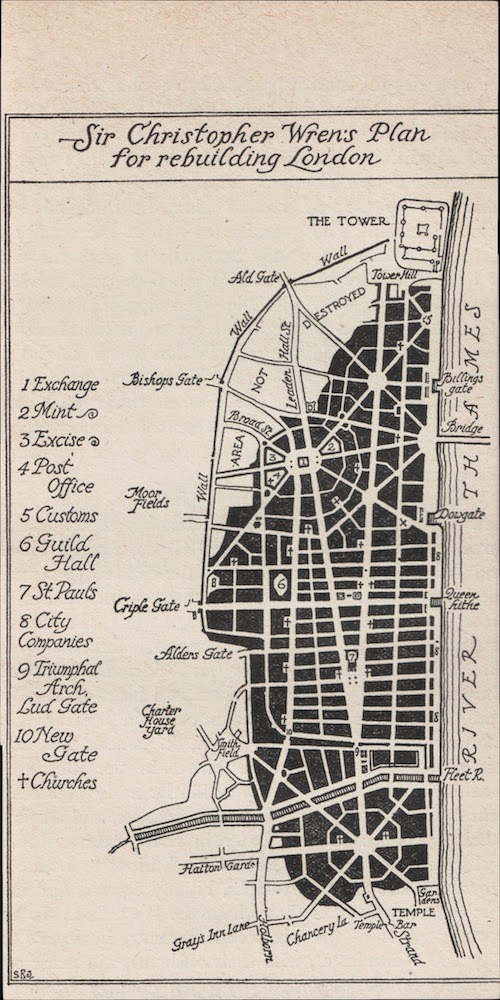 It is, as you can see, the London that we’d have if Christopher Wren had got his way.  It’s his plan for the rebuilding of London after the Great Fire pretty much wiped the slate clean.

In fact, one of the fascinating things about the map is that it shows us exactly how much of London was put to the torch – completely burned out – by the Great Fire. And how much of it escaped the conflagration. You can see the legend – “AREA NOT DESTROYED” – in the upper left hand corner. It’s the white bit, the bit of edging crust. The rest of the map is the same ash black that virtually the whole London pie – 373 acres – had been reduced to.

Wren’s plan is a masterpiece of lucidity, urban beauty and common sense.

The Wren-planned London would have had two main focal points and three subsidiary ones.

The other focal point was of course St. Paul’s. Approached from the west, as the explanatory notes make clear, through a Triumphal Arch at Ludgate and then along a gradually opening up public space vista.

Coming from the other direction, the east, the cathedral crowns the apex of those two converging great avenues.

Then there’s the western antechamber of London: Extra-mural* London. In other words, Fleet Street and its environs.  The tangle of alleys and courts off Fleet Street has been turned into something grand, something that unfolds with the perfection of a rose. Eight streets radiating out from about where St. Dunstan’s in the West stands today. Riverine vistas at the end of four of the streets – three to the Fleet River, one to the Thames. A garden vista (and the Thames beyond it) at the end of a fifth street. The mighty Strand – Go West, young man, go west – and Royal London vista-ing the sixth street radiant. And for the remaining two, vistas of the green hills to the north and northwest of London.

As for the river frontage… For it Wren envisaged a wide, indeed a noble quay. An esplanade divided up ever so sensibly. The eastern, downstream end of it – from Dowgate to the Tower – would have been for commerce. The western end was to be a terrace punctuated with the halls of the City Companies. There they were to be, a parade of them rejoicing in their wealth and might and the grandeur of their riverside setting.

Yeah, not bad at all. And it was completely stillborn. None of it happened. The City’s commercial and other vested interests won out. Wren couldn’t get over the barbed wire emplacements of the City’s deeply ingrained instincts for private property, couldn’t overcome the complex mosaic of centuries-old land ownership.

What could have been. Pretty to think about, isn’t it?

And as for what we got instead. Well, in terms of streets and street “pattern” (f you can call it a “pattern”) and building line, well, it was pretty much business as usual. The old layout. The time-honoured fissures, the old lines. Just two new streets – King William Street and New Queen Street. Everything else just as it was – or just where it was – before the fire.

This 18th century map tells all.  It was the reality. And it’s much closer to our London than the London that Wren envisioned. 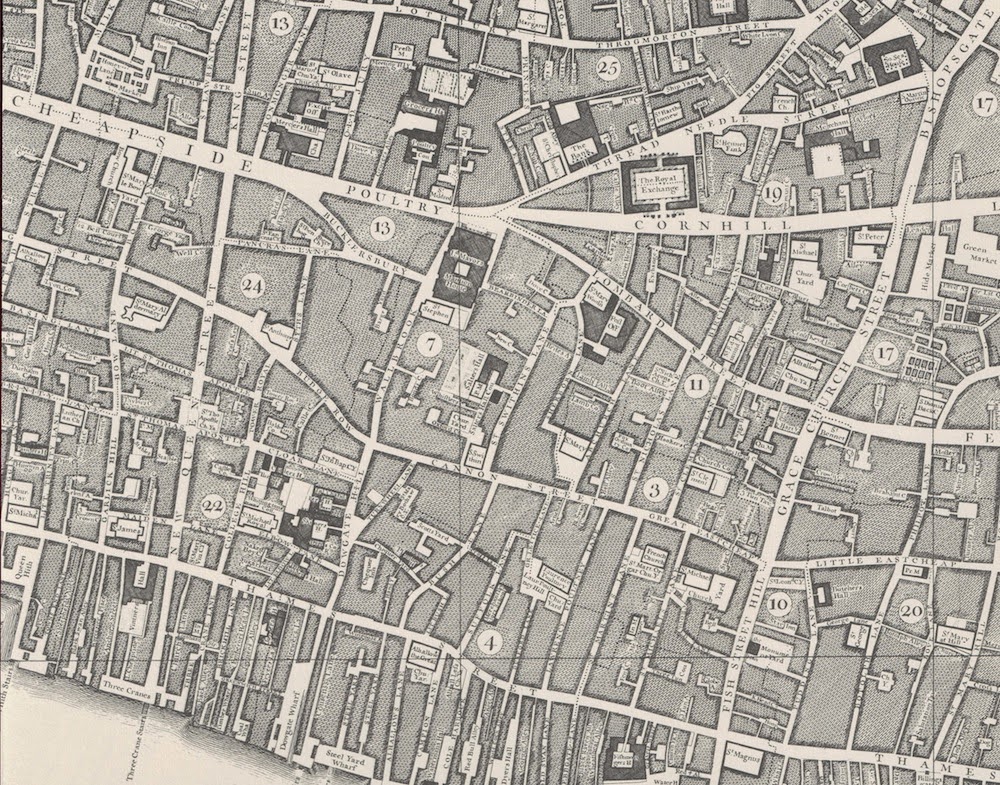 It’s a tangle. A rat’s nest of streets. Everything’s higgledy piggledy. Maybe start your scrutiny by looking at the Royal Exchange and its environs (see the big street CORNHILL – the Royal Exchange is directly above it) and comparing it with what Wren envisioned.

And maybe for seconds take a look at the warren of courts and alleyways between College Hill and Dowgate Hill (just to the east of the Number 22 on the map).  The street names – this is more or less always the case in London – are a joy: Naked Boy Court, for example. And Elbow Lane. And Sugarloaf Court.

I’ll take it. Avenues north and south and streets east and west as they do these things in New York has its advantages – you can get off the boat from Uzbekistan, a brand new American, and be at the wheel of a yellow vehicle – be a New York cabbie – inside of a week. As opposed to the five or so years of “doing the knowledge” that it’ll take you to become a London cab driver. So, yes, there are certain advantages, but I’ll take London. Take it every time. Take every neighbourhood being its own snowflake of complexity and individuality. Take it in its full-on higgledy piggledyness.

Not least because, hey, we probably wouldn’t have a job if Wren had got his way. Who needs a guide if it’s dead easy to find your way around?

Email ThisBlogThis!Share to TwitterShare to FacebookShare to Pinterest
Labels: The City of London