The Modus Operandi of a #London Walks Guide by David Tucker

This one from David back in January 2015…

Where do we get our information from?

Not where you think. Well, probably think.

Not guidebooks and Wikipedia.

Ok, occasionally we’ll put in there. But we don’t make a habit of it.

Reason being? Well, pride, really. Any guide worth his salt the thought of putting together a walking tour from the low hanging fruit of a guidebook and Wiki – well, that’ll give him or her the shudders.

“Come on, you kidding me? Cobble together something that they – our walkers – can rustle up themselves in a trice? And offer that sort of tripe up with a straight face? No thanks. We’re better than that.”

So where do we get it from?

Some of the sources are pretty obvious. But not all of them.

1.     Books. Of course. I – David – suffer from an incurable case of bibliomania so I’ve probably got the biggest “library” of all. The London collection itself will be comfortably into four figures. Not so many, really. Not if you think of the time that’s gone into it. 25 books a year for 40 years. That’s only a couple of books a month. Peanuts.

2.   Libraries of course. I may have 1,000+ books on London at home but I feel like a London book pauper when I go into the basement of the London Library. Into the Topography section. The letter L section. The London section. Shelf after shelf of them, as far as they eye can see. Heaven.

3. Specialist libraries. Local Studies collections. I spend a lot of time in the Kensington one in particular. The fruits of those labours – though labours is hardly the word for such an agreeable pastime – have found their way into a couple of fascinating stops on my Kensington walk. (And indeed into various pieces that have appeared here, on the DC.) Those “finds” are in the public “realm” – but only just. You have to do what I did – go into the Kensington Local Studies Library and do some serious diving down to bring those pearls up.

4, Kew. The Public Record Office. Surely this one needs no glossing.

5. Doorstepping. Yup. I’ve done it. Knocked on a stranger’s door and hoped for the best. The best being their not being irate that a complete stranger has had the temerity to knock on their door and ask them a question about their house. And their actually knowing the answer to your question. When it’s good this one is REALLY good – you often get so much more than you hoped for. Everything from a tour of the house to extra bits of fascinating information that you weren’t angling for.

6. The old tried and trusty: a stamped, self-addressed envelope through the letter box with a covering note explaining who you are and what you want to know. An example? There’s the most wonderful piece of exterior wall decoration on a house in Hampstead that I go by on my walk up there. Doesn’t look even remotely English. Couldn’t find out anything about it. None of the neighbours passing in the street could shed any light on it. Blank after blank I drew. Until I posted the stamped, self-addressed job through the letter box. Infinitely charming letter back. They were delighted that somebody had taken an interest in it. Turns out it’s Haitian. Made from oil drums that the artist took a pair of shears to. They bought it in a street market in Haiti in the 1990s. Shipped it back over here. And there it is – Adam and Eve, the tree of life, a couple of mermaids – on a wonderful old Georgian house in Hampstead. Almost impossible to see unless you know exactly where to stand and where to look. And utterly impossible to “crack” – to know its story – unless you’re on my Sunday morning Hampstead walk.

7. Neighbours. And friends. When the famous poet’s widow died a couple of years ago a friend who lives across the street told me the housekeepers told him that he (the poet) had written her (his, the poet’s wife) a letter every week, even though they were under the same roof together. And for the rest of her life – and a very long widowhood it was – she slept with a couple of those letters under her pillow every night. And I’m not going to say any more – you chance on the right walk with me names will be named and you’ll get the full story. Including his preference for green face makeup and the vow of chastity in 1929 and her high heels with socks.

8. Neighbours. Again. Another variation on the theme. Sometimes they invite you in. Here’s an instance. 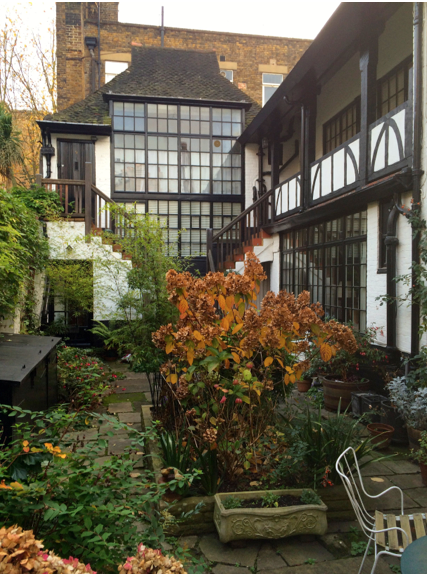 It’s the completely private – can’t so much as be glimpsed from the street – communal courtyard at the centre of a small complex, now converted to flats, of purpose-built early 20th century artists’ studios. We were on the doorstep a couple of weeks ago. A resident pitched up and was keying herself in and, well, I popped the question. And our luck was in. She was hospitality itself. Invited us in for a look. To say nothing of a bit of a photo-op.

And going forward from moments like this, if you’re the guide… Well, you and your walkers are standing on the outside but you’re talking about a house you’ve seen on the inside. Maybe its 18th century locks on the door. Or, in this instance, its secret courtyard. Whatever. Happens all the time. And it greatly enriches the final product – the walk you (our London Walkers) get. You don’t just get to know the house, inside and out, you also get to know something of the character of the people who live on the other side of that front door.

9. Colleagues. One of the best things about this merry band – London Walks guides – is it’s collegiate. We’re on the phone to one another all the time. Sharing our latest discovery with one another.

This photo, for example. 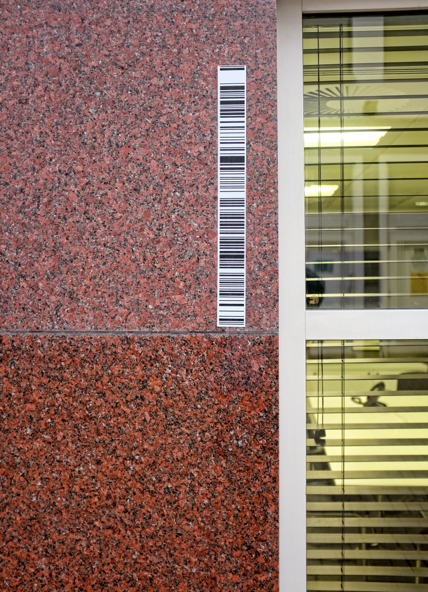 Huh? Here’s the, er, skinny. I recently took a wander through Leather Lane. The barcode on the side of the building caught my eye. Thought, “ok, I’m going to find out what’s that’s all about.” It was at the back of the building. The back of a good sized building. There were a couple of Fire Escape doors there but effectively no way in on that side of the establishment. And I had a hunch that the Receptionist/Security Guards around the front way wouldn’t buy my unlikely tale. “Hey, there’s a barcode on the back of your building – will you let me in so I can go back there and ask someone about it?” That had non-starter written all over it. But there was a young woman in the office. Had her back to me. She was eating a sandwich at her desk. Banged on the window. Got her attention. Got her to come to the window and I flashed her. Shame on you. Flashed. Her. The. Note. This note. 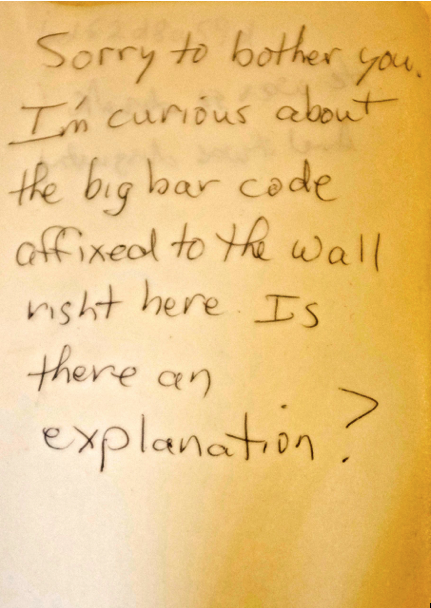 She didn’t know the answer but she summoned help. A colleague. A young man. The window was triple glazed so the audibility from their world to mine was nil. But, hey, I’d blazed the trail. He got a piece a paper and scribbled out what he knew and held it up to the window and hey presto, I had an answer. Not much of an answer. But more than I knew before. Enough to be getting on with. His note read:

IT WAS EXTERNAL MARKETING. NOTHING TO DO WITH OUR COMPANY.

And on that note I could saddle up and move on. I felt like Hansel. I’d picked up a white pebble that would help me navigate through there just that bit better – that bit more knowledgably – next time I was down Leather Lane way. Were a sharp-eyed walker to spot it and wonder about it – as I’d done – well, I’d have a morsel for him. A bread crumb. Be able to shed just a tiny bit of light on that tiny, quixotic, “piece” of Leather Lane.

A bit of London small change and you know what – I’ll take it.

Ok. Enough. It’s just a partial list, this. But it’ll give you an idea. It’s pretty Sherlock, really. Something will catch our eye – something unusual, piquant, out-of-the-way – and we’ll find a way of finding out about it. It’s what we do. These ten are some of the ways we do what we do.