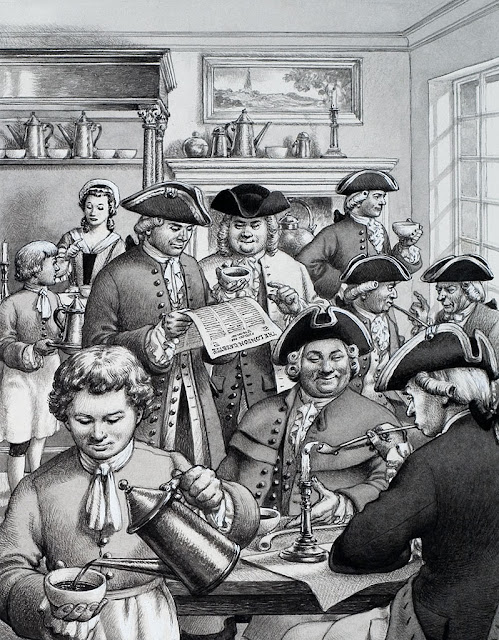 Let’s think about coffee houses then. Rather than now. (Starbucks. You really think the Whig view of history – a steady progress towards some particular goal, things getting ever better – stands up?)

But no, coffee houses then. Not least because of a half dozen or so Friday London Walks.

But cheese first. One of the photographers on a private Inside – Really Inside – Covent Garden walk we did earlier this month took a stunning photo of a Stilton cheese in Rule’s Restaurant.

The “cheese sequence” – tracking back – is what’s on the cheese plate, milk, the milk cow and the grass she crops-chews-cuds-digests-etc., the soil the grass grows in and takes its nutrients from (and the rain of course), the underlying geology.

So you’ve got White’s Chocolate House (as it was originally – it today is of course the most exclusive gentlemen’s club in town) in St. James’s. We’ll go there on our Old Palace Quarter walk on Wednesdays & Fridays. And there’ll certainly be some regaling there – because its history – let alone its character – is, well, colourful.  But the point is it – and its fellows further down St. James’s Street and round the corner in Pall Mall – were smack dab in the heart of aristocratic London. So that meant politics – aristocrats were, after all, “the ruling class” – and gambling. At White’s members would stake their fortune on the throw of a dice. Well, why not, they were staking the fortunes of the country – and the lives and livelihoods of “their countrymen” – on equally dicey stuff.

Moving east you were into Theatreland – the purlieus of actors, writers, “wits” and prostitutes. So we’ve got Will’s in Russell Street there in C.G., the hangout for the superstar writer of his era, John Dryden, and his circle. People who were good with words so, sure enough, it was had the highest reputation for scintillating, for witty conversation.  We’ll sleuth along there on the Sherlock Holmes walk on Fridays.

Heading still further east we’re on our Legal London walk inthe Inns of Court neighbourhood. In one of its many shining moments the Legal London walk will thread its way along Devereaux Court, home of the Grecian Court coffee house, home away from home of the best brains in London – the London learned – members of the Royal Society – off-the-chart IQs – people like Isaac Newton, Edmund Halley, Hans Sloane, etc. We could have eavesdropped there but chances are what we overheard would have been over our heads.

And then it’s along Fleet Street, up Ludgate Hill to St. Paul’s. Our Hidden London walk will end up there. Just as the great biographer James Boswell liked to end up – well, pitch up – there after his day’s and evening’s exertions. Specifically, Child’s coffee house, in St. Paul’s churchyard. It had a much more sober (and sobering) atmosphere. How could it have been otherwise being next door to St. Paul’s cathedral? A sobering atmosphere that was presumably calming, steadying, atoning for Boswell and his ilk. You can hear Boswell talking to himself, “Phew! It’s Saturday night – it’s been a week of ‘luscious fatigues’ – it’s now beeline time for Child’s and spot of R & R and atoning.”

The character, the variety of London’s neighbourhoods. Of its history. Endlessly fascinating.

Email ThisBlogThis!Share to TwitterShare to FacebookShare to Pinterest
Labels: coffee houses in London