On this day… Marianne Faithfull recorded her first hit single As Tears Go By, 26th May 1964.

Present at the recording that day future Led Zep bandmates Jimmy Page on guitar and John Paul Jones on bass. The composers are Jagger & Richards and the record made number 9 in the UK singles chart and number 22 in the U.S.

Stones manager Andrew Loog Oldham, in one of the many legends surrounding this early Jagger/Richards song, demanded a number "with brick walls all around it, high windows and no sex."

Here's Marianne miming along to the track for US TV's Hullaballoo in 1965, in a segment presented by Brian Epstein…

The song remains in her live set to this day. Here she is again, separated from her 18-year-old self by 50 years. Andrew Loog Oldham's high walls are in ruins. She's sorrowful but not bitter. The frippery of the oboe is gone, as is the puppy-ishly eager beat and she's way down the vocal register. As much as I love the '64 version, in this 2005 take she inhabits the performance in a way that an 18-year-old could only dream of…

Faithfull's first album followed soon after. Entitled Come My Way, it's a great folk-flavoured record (released on the Decca label) it contains many of the seeds of Marianne Faithfull’s later career as a respected chanteuse.

The sleeve shot was captured in London's West End… 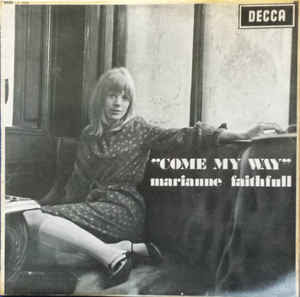 …on St Martin’s Lane, WC2, in The Salisbury Pub.

This ornate gin palace dates back to 1892 and is one of the West End’s best-preserved old pubs. Ask for directions at the end of the Rock'n'Roll London Pub Walk, or find it under your own steam here…

The Rock'n'Roll London walk is ONLY London Walk with its own dedicated comic book! Written by Rock'n'Roll London guide (and Daily Constitutional editor Adam) you can download at the London Bookstore online: londonbookstore.myshopify.com