A Cartoon & #ComicBook Tour Of #London No.24: #BigBen Revisited & Return to Über @kierongillen 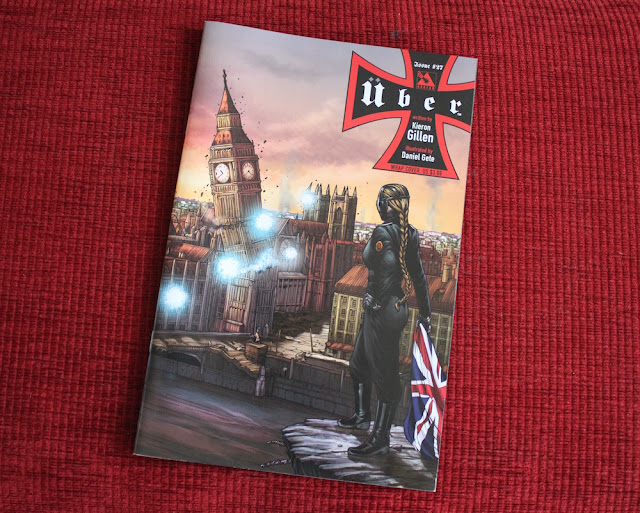 Suddenly I was nine again. The heart-stopping cover image brought those childhood nightmares roaring back.


Über is written by Kieron Gillen and illustrated by Daniel Gete. It is a World War Two alternative history, envisaging a stalemate in May 1945 when the Nazis develop a new secret weapon, the Übermen. It is both a dark subversion of the superhero and a thoroughly gripping thriller.


We've visited Über already on this tour. Regular readers will remember that its explicit wartime subject matter created a quandary for this blogger. On the day I sat down to cover it, back in January 2015, the first rumblings of the Charlie Hebdo atrocity in Paris began to filter through (catch up with the post HERE).

The landmark chosen for the cover of this comic book (episode 27, the last in the first cycle of the Über story) underpins one of our running themes in this virtual tour: if you want to set your location as London, draw Big Ben as your centrepiece. We've now visited that famous clock with The Fantastic Four, Deadpool AND Spiderman, Scooby Doo and not one but THREE Disney films.

Trafalgar Square and other Westminster locations featured the last time we posted about Über in this series (see Panel 7). Über will return to comic book stores in 2016. And while I'll miss the London locations - the next part of the tale moves to the United States – I'll look forward to following its harrowing narrative.