LW's David Tucker Wishes You All A Happy #Thanksgiving

Happy Thanksgiving to all Daily Constitutionalists and London Walkers! And on this American Day of Days, who better than David – Wisconsonite and ferociously proud denizen of London, both – to take the helm ? Here he is - in a post first published in 2015 – with a special linguistic and etymological fireworks display for Thanksgiving: 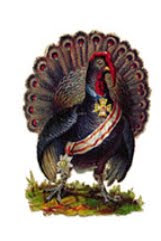 And off he goes, a modern-day Paul Revere spreading The Message. And the message is? Well, you’ll have to meet him at Westminster this afternoon. That’s right: David’s working up an appetite for his Thanksgiving turkey by leading his Westminster Walk at 2.00p.m today!