See The #NYE Fireworks On The Hampstead Pub Walk 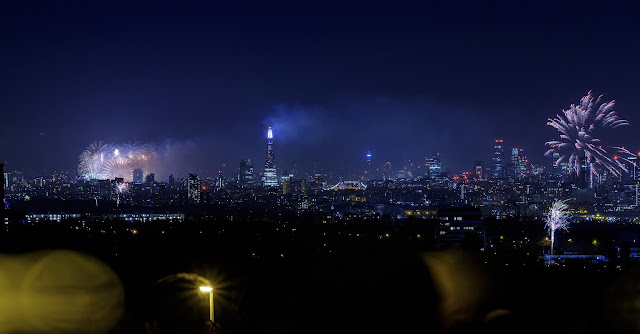 Six *thinking-outside-the-box *reasons. Good reasons. Reasons you probably won't have thought of. They're personal reasons but you'll take them on board, I'm sure – share them.

1. I object mightily – object in principle – to having to pay £10 to look up at the night sky. If you don't – well, that's what makes a horse race.

3. Contra flow. By that I mean, when the fireworks are over there are going to be a million people down in central London stampeding for the Tube and buses. No one down there is going to be able to "hop on a bus" or "hop on the Tube" because everybody – an ocean of humanity – is going to be surging toward those buses and Tube stations. Carriages are going to be crammed, jammed, overflowing. Most people are going to be looking at long delays before they can finally fight their way into a station and onto a carriage (or onto a bus). That's not going to be our problem. We'll be heading in - not trying to get out. Contra flow. No problem at all catching the Tube or getting on a bus. Trust me, a lot of those people with "ring side" tickets for the central London show are going to be walking home afterward – or walking a good part of the way home. Because they won't be able to get on a Tube or a bus. That's their problem and they're welcome to it. Our contra flow walkers won't be drawing that short straw.

4. The thousand points of light. Up top – up on Parliament Hill – we'll be able to see all the fireworks, right across London. That's in addition to the big show. So: 1) the Big Show, the main event down in central London; 2) the local stuff - the nearby Hampstead area fireworks; 3) the further afield fireworks "sideshows" across London. So: a full palette as opposed to just the one big show.

5. The pubs we're going to will be busy but not packed to the rafters, not turning people away.

7. Seventh reason isn't a thinking-outside-the-box job. It's that both halves of the evening are wonderful. A New Year's Eve Pub Walk in Hampstead – how do you go wrong with that? And the second half – making the short walk to South Hampstead with Richard, meeting up there with Mary and me, spending an hour or so in a very agreeable pub (and if anybody wants I'll [David] be very happy to do a spot of South Hampstead guiding – Keats' House, the "loveliest street in London", etc.) – and then come the appointed time the short stroll up to the top of Parliament Hill and our perch to "take survey of London", watch the fireworks, etc. – well, it's the perfect grand finale. Put the two halves together you've got a very special, a memorable New Year's Eve. *Memories make us rich. *