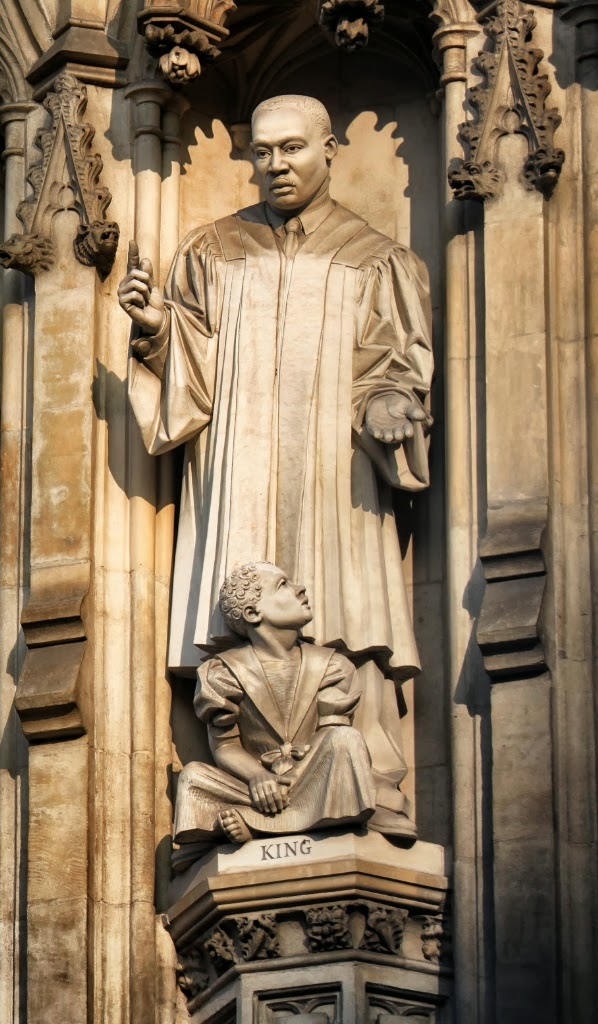 Pictured is Tim Crawley's statue of King above the West entrance of Westminster Abbey.

Back in 1964, on his way to Oslo to collect the Nobel Peace Prize, Doctor King broke his journey in London. He preached at St Paul's Cathedral on 6th December 1964.

On the morning of 6 December 1964 he addressed a congregation of 4,000 people from the Cathedral pulpit and delivered his sermon "The Three Dimensions of a Complete Life".

In the sermon he described the first dimension as being a life of self interest "living as though no one else existed - victimized by the acid of egoism"; the second dimension he characterised as the outward concern with the welfare of others, "a love of humanity"; and the third dimension was man's upward reach towards God. The sermon exhorted the congregation to be the best that they could be.

"If you can’t be a pine on the top of a hill be a scrub in the valley - but be the best little scrub on the side of the hill.

If you can’t be the sun be a star; It isn’t by size that you win or fail - be the best of whatever you are.

After the sermon – at which he had addressed some 4,000 people in a packed, standing-room-only cathedral – he gave a press conference in which he warned that immigration laws based on colour would be completely at odds with the teaching of God.

In an excellent piece for The Guardian in 2015 Hugh Muir analyses Dr King's visit in the context of Britain immigration policies of the 60s. Read it here: www.theguardian.com/us-news/2014/dec/02/martin-luther-king-in-london-1964-reflections-on-a-landmark-visit

Today at Westminster Abbey a special service in honour of Dr King – Rediscovering Justice: A Service of Hope – will take place at noon. Full details at the Abbey's website: www.westminster-abbey.org