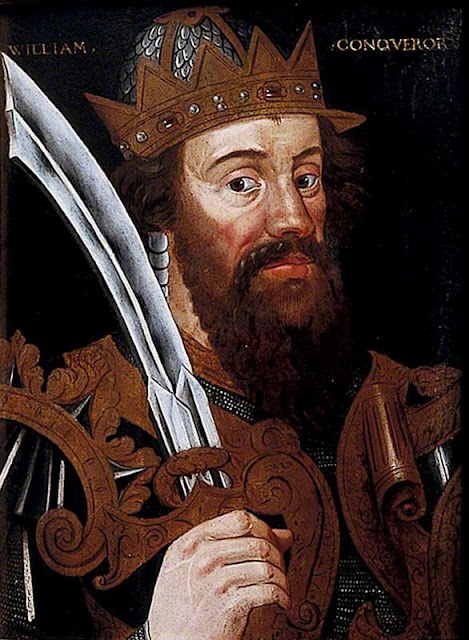 For those who are going on Wednesday’s or Sunday’s Tower of London Tour.

In the blurb for the Tower tour we call William the Conqueror – who gave us the Tower – the bastard. Which he was.

But I think of him as the Squitterer In Chief.  For two reasons.

1. Because of his brood of male offspring. Four unforgettable – nose clothes-pin at the ready? – results of his squittering. And

2. Because of his, William’s – THREE-LINE WHIP HERE, APPLY NOSE CLOTHES-PIN AT ONCE – death.

Especially what he did after he entered the long night.

Still wondering? Haven’t looked it up?

Squitter means – thanks for sharing this with me, OED – “to void thin excrement.”

A lot of talk about dysfunctional families the last few days. The Windsors. The Markles. King Lear and his family. (Lear in connection with great director Richard Eyre’s eagerly anticipated, about-to-open production of the play.*)

But the Windsors, the Markles, even Lear’s – they’re just toddlers, rank amateurs in the matter of showing the world what a truly dysfunctional family looks like.

Ok, here we go. Keep some of this in mind when you’re in there looking at the White Tower – William the Conqueror’s mailed fist of a building – on that tour.

William the Conqueror had four sons. His squitterings.

The eldest – of the three who reached adulthood – was Robert Curthose.

While the cat’s away…

Dad’s reaction? “I’ll sort that little shit out.” (Aside: little’s another mot juste. It’s in that name Curthose. Robert was fat and had short legs. Didn’t keep him from helping himself to “the beautiful mistress of an old priest.” Or from fathering a few bastards of his own.

Dad didn’t kill sonny. He probably should have done. Or at least locked him up – as Robert’s younger brothers did. For 28 years.

Because the lot of them – this was the dysfunctional family of all time, remember – quarrelled and bickered incessantly. With international consequences.

Out of control, the lot of them. But Robert might well take the cake. Tearaway. Rebellion after rebellion. Forever burning through his funds.

Doing for his father.

Big bad dad (the bastard, William the C) – now grotesquely fat – has to head back over to Normandy to sort out another rebellion. Iron fist brought down on the rebellious town of Mantes. And then – for good measure – he torches it. Having Zippo’d Mantes, William thought he’d take a show-‘em-who’s-boss ride through the town that he’d turned into a pyre. His horse stepped on a red hot ember. Hot footed, the horse reared. William the C, partridge plump, went up off the saddle like Humpty Dumpty on a trampoline. Came down hard. On the iron saddle horn, the pommel. Terrible internal injuries to his beachball stomach. Died in agony a few days later. His peeps stripped the jubbly stiff – yeah, I know – and cleared out.

Funeral time. More fun time. A few monks tried to stuff the bloated corpse into a small sarcophagus, like trying to get a beached whale into a suitcase.

Corpse splits open. Erupts. Talk about squittering. Stench like a convention of country and western festival portaloos fresh from the field of battle.

And that wafts us to second grown-up son, William Rufus. Who everybody loathed (and feared). Ticked pretty much all the boxes in the 11th century’s This Was One Nasty Piece of Work Checklist. He was a tyrant; he was an indiscriminate lecher (swung both ways); despite being anything but easy on the eyes he was vain: short (his mother was only just over four feet tall), thickset, blonde, red-faced (ergo that handle Rufus), ponced around in short tunics and shoes with long points which curled like scorpions’ tails; pissed on his aforementioned brother Curthose (visiting Robert C. he went up onto a balcony and urinated down on the heads of Robert and  Robert’s chums); he was bad news for the church; his punitive taxes were right at the top of the “let me show you how its done, son” league; the nobles couldn’t stomach his extravagance, let alone his homosexuality; he put 50 innocent Englishmen to the ordeal of the hot iron; and on it goes.

Was killed – arrow in the heart – in a hunting “accident”. There’s been considerable historical speculation that it wasn’t in the least an accident – that his devoted little brother Henri “arranged it”. Think you that meets the highest standards of dysfunctional familydom? Does by my books.

That said, this mob had form in these matters. Richard, the fourth brother – the one who didn’t make it into adulthood, who’s barely a footnote – was also mistaken for game – a young deer or perhaps a small boar? – and ushered into the long night at the point and shaft of a well aimed arrow.

Before we leave Rufus – no doubt rampaging, spoiling it for everybody – in the long night, anything to be said for Rufus? Sure is: Westminster Hall. The greatest mediaeval hall in Europe. Easy to imagine him thinking he’d torch his father’s memory: “White Tower? I’ll show that stinking bastard how you build an impressive building.”

Oh and he was supposed to be witty. The which is an elastic term, of course. Rufus may well have thought that anointing his brother and his brother’s friends with the yellow stuff was witty. Most people probably wouldn’t.

And that leaves Henri. Henry. Henry Beauclerc (because he was the only one of the four of them who could read and write). Henry I in the annals of English kingship. If he did in fact engineer his brother’s death – fratricide and regicide all rolled up into one – well, that’s setting the mark pretty high.

To that you can add his fathering, on a harem of mistresses, more bastard children – 20+ and counting – than any other English king. Eat your heart out Charles II.

And on that note, enjoy your tour. And make of it what you will that – thanks to London Walks – you’ll never be able to watch an old episode of My Three Sons (Fred MacMurray, anybody remember him?) without thinking about the Bastard’s bastards (and their bastards).

*King Lear and his mob have to be the most dysfunctional family in all of dramatic literature. And what – fascinating, this – has bearing on that is Shakespeare’s living with – he was their lodger – a hugely dysfunctional family of Huguenot immigrants when he wrote King Lear.  RSC actor Steve Noonan opens that episode up to view on Sunday afternoon when he’s guiding the Shakespeare (and Dickens) walk and gets his walkers into that neighbourhood.

Tour The Tower of London with London Walks on Wednesdays and Sundays.

Email ThisBlogThis!Share to TwitterShare to FacebookShare to Pinterest
Labels: Royal, William I, William the Conqueror