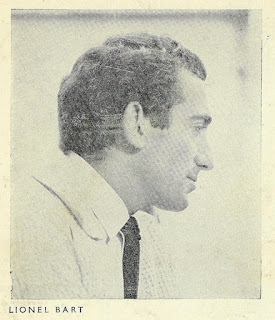 
As is always the case when heading to the East End, I've got my favourite East Ender on my mind, one of my great musical heroes Lionel Bart.


I'm sharing just three of his many great London works today.  Of the three pieces I have chosen, none mention the capital explicitly. But break them open and these songs have London written right through 'em like a stick of rock.


The showstopper from Oliver! And that's saying something in a show with such an embarrassment of riches in the score. Georgia Brown's version is from the original cast album. It's a voice that could knock yer hat off along the length of The Strand, true as an East End bell.

Brown was born Lillian Claire Laizer Getter Klot into an East End Jewish family in Whitechapel in 1933. At the audition for Oliver! in 1960, Bart immediately recognised her as a childhood neighbour from the East End and cried out, "Lilly Klot!"


Who's This Geezer Hitler?


Parody of a wartime comedy morale song – and a very funny one at that.


If 'e was much littler/'e would disappear

In the same show Bart gives us The Day After Tomorrow, and Vera Lynn obliges on the vocal chores. Both songs are so faithful that they could easily have been written on Denmark Street as the bombs nearly hit St Giles Church on the night of the 9th October 1940.

Fings Ain't What They Used T'be…

More a play with music than an out-and-out musical, something more along the lines of Brecht and Weill than Rogers & Hammerstein, this title number from the show that transferred to the Garrick in the West End (with the rhyming slang lyrics translated in the programme notes!) was later covered by the wholesome entertainer Max Bygraves… with cuts made to the bits about hookers, criminal activity and barely-veiled threats of violence. What? Did he just whistle the tune, then? This version is the original cast recording (sorry, Max).


Meet me at 2pm Sunday 28th October, Whitechapel tube for The Unknown East End tour. The walk costs £10/£8 pay on the day or book now via my online shop Pay-A-Tour. Click the sign to book…