Social Media in The Olden Days


As regular readers will know, The Daily Constitutional has undergone something of a revamp of late to celebrate its 10th birthday – I have been editing and writing this blog since October 2008. Happy birthday to me!

Since then, young reader, I have seen some changes, let me tell you.

When I first started blogging, social media was in something of a fluid state and whenever I heard of a new platform to spread the word of my blog I would hop on board. I was digging around in the archive today when I came across my old post footer with all the social media icons - there's still a similar parade of icons at the bottom of each post today. Can you spot the difference… 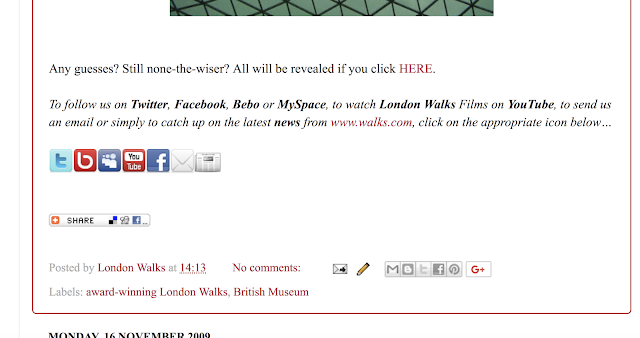 So first of all, today's icons (below) are hand-drawn rather than taken from a template. But what are the icons second and third from the left all about?

Does anyone remember Bebo? In the days of yore, Bebo was just one social media app vying for our clicks. It had a white board for drawing and facilities for sharing pics and was HUGE in Ireland - at one point it was the most visited site there. The platform was sold to AOL in March 2008 for $850million -a deal described by the BBC soon after as "one of the worst ever made in the dotcom era."

By 2010 we had all moved to Facebook, but at the height of its popularity Bebo even overtook MySpace as the No.1 social media site here in the UK.

Which leads us to the question: Alright granddad, what was MySpace?

Between 2006 and 2009, MySpace was the largest social media site in the world. It's still up and running, but has become something of the ghost town of the social media world. Typing its name into Google yielded the following question…

… which pretty much sums it up.

An article from The Guardian earlier this year (2008) paints a lonely, and not a little creepy picture, with one user stating…


“It’s almost like I’ve taken over a dead site,” he said, noting that at least women did not block him or remove his comments any more. “I think it’s funny. I’ll leave comments and messages for girls who haven’t been on there for years.”


A few weeks ago I was chatting with my daughter (who is 11) about music. I was interested in how she listens and where she finds new music. The topic of the Top 40 came up. I told her that, from the age of about 10 to the the time I was nearly 17 I loved to "tape the charts off the radio" (meaning illegally record the top forty on to a cassette) and she just gave me a blank look.

It was the same blank look I gave my dad when he talked about newsreels at the cinema.

It's funny to think that we've already reached this stage with social media. If I'd said to my daughter, "I've just changed my skin on Bebo," she'd probably think I'd gone off my head.