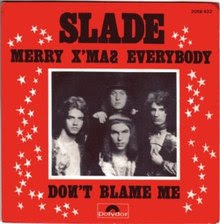 At this time of year, with Christmas themed tunes blasting out at us from every turn, it's difficult not to lose patience (!) with the whole idea of seasonal music.

This year I'm aiming to stop and have not only a good listen, but also a look at the history of our favourite Christmas music, keeping a particular eye on London connections. I hope you enjoy this series and that it might help a little bit when you are cracking-up while doing the Christmas shopping on Oxford Street…


This afternoon on The London Music Tour (2pm Tottenham Court Road tube), the name Chas Chandler will pop up more than once.


Although they never fared particularly well in the US, Slade still occupy a place of great affection and esteem in the hearts of British music fans.

Until this three years ago.

One Wednesday morning, my (then) eight-year-old daughter Isobella was getting dressed for school. My wife had tuned the radio to Smooth Christmas FM and I was frankly a bit grumpy about it – I prefer BBC6 Music.

That Wednesday I barely registered it. It is such a part of the Christmas landscape that acknowledging it would be akin to gasping in shock every time one saw a decorated tree in the month of December.

That was the moment when I realised… I had become a musical Ebeneezer Scrooge.

So I listened. REALLY listened. And as my daughter sang along, I really HEARD…

Once again I felt like Ebeneezer Scrooge, only this time I was throwing open the windows on Christmas morning and seeing – and hearing –  the day for the first time.

on that first Christmas Day of the rest of his life, I listened to Slade and resolved henceforth to keep Christmas music not just in my heart, but in my ears too.
Thanks to my Christmas spirits for showing the way… Isobella, Chas Chandler, Slade - Noddy Holder, Jim Lea, Dave Hill & Don Powell. And, of course, apologies to C. Dickens, not only for purloining his great Christmas Carol, but also because, for the first time ever, his beloved Christmas book has slipped to number two in my personal Christmas hit parade. I now realise that Merry Christmas Everybody by Slade is a more important British cultural Christmas artefact by far. AND you can dance to it.

Email ThisBlogThis!Share to TwitterShare to FacebookShare to Pinterest
Labels: Slade