This week it's Dracula Week on the Daily Constitutional. So here's a Drac Plaque… 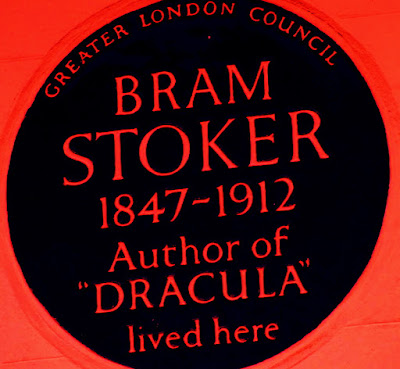 His personal mark, like those of many an Irish man of letters, is left all over London. His name is carved into the stone of the Lyceum Theatre in the West End, where he worked for Sir Henry Irving for 27 years.

He worked also at the Prince of Wales Theatre and on Fleet Street, on the staff at the Daily Telegraph.

He died in St George’s Square, Pimlico, SW1 and his ashes are at Golders Green Crematorium – where his urn can be viewed by special appointment only.

Two summers ago, I took the cast of the Lion King in search of Bram at the Lyceum Theatre. Here's what we got up to…