Scroll to the bottom for my BRAND NEW tour Beatlemania! The Beatles In London 1961 - 1965. 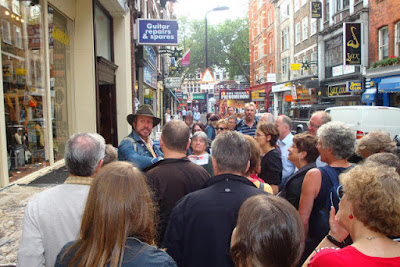 "Our was an enchanting entertainer, full of anecdotes… absolutely recommendable, if you are lucky enough to have Adam as your guide."
★★★★★
sandrahuewles TripAdvisor September 2019 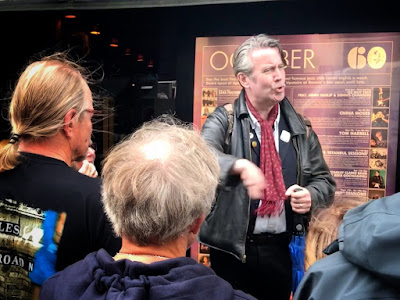 
A walking tour in search of the two most influential, most important acts of the decade.Where they led, EVERYONE followed.We’re following, too - in their footsteps to find... The hotel where Dylan held court… The theatre where Lennon played his first major solo UK… The pubs & coffee bars of Dylan’s first visit in ‘62And we’ll take a look at how London has changed from the post-war period of the Pop Culture explosion to the 21st CenturyOur tour covers the hopeful winter of 1962-63, the optimism of success in 1964, thence in to the uncharted territory of ’65-’66 and the birth of Pop CulturePracticalsA longer, more detailed tour - my regular London Music Tours usually take 1.5 - 2 hours. This Bonus Tracks tour is longer and covers more ground. Our 3 hour tour will include an interval. Smaller, more intimate groups - maximum number of 12 walkers

"Totally brilliant… I was sorry when it ended."
★★★★★
onefromfour TripAdvisor May 2019 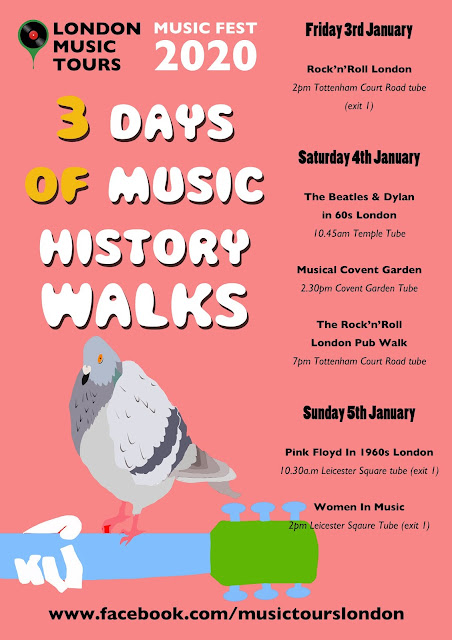 With MUSIC FEST 2020 you can book one tour or as many as you like! 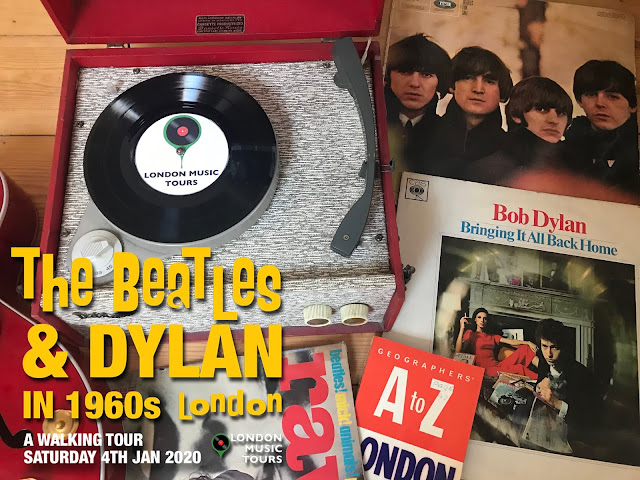 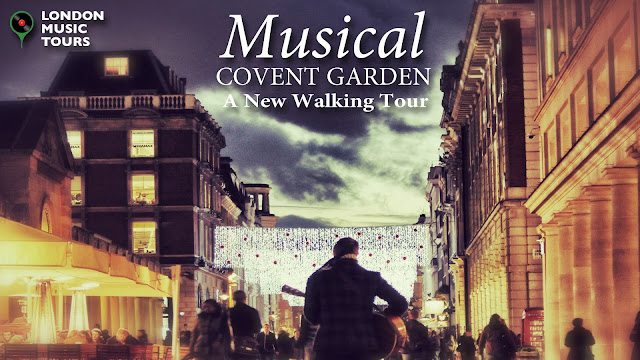 A brand NEW London Music Tour for 2020 – Musical Covent Garden.
From the Opera House to the theatre where Bob Marley became a legend; via the oldest recording studio in Britain (1898) to the hotel where Bob Dylan held court in ’65; from Rule Britannia to On the Street Where You Live – this London Music Tour covers the musical waterfront from Arne to Zappa.
We’ll see…The Savoy HotelThe Savoy TheatreThe Gramophone Company’s recording studios 1898-1931The Royal Opera HouseSt Paul’s Church as featured in My Fair LadyThe Lyceum TheatreThe Middle Earth Club where Pink Floyd playedFrom John Gay’s The Beggar’s Opera to Bob Marley’s Exodus, there will be cameo appearances from Noel Coward, Alan Jay Lerner, Charlie Chaplin, The Smiths, U2 and – in the best tradition of greatest hits collections – many, many more. 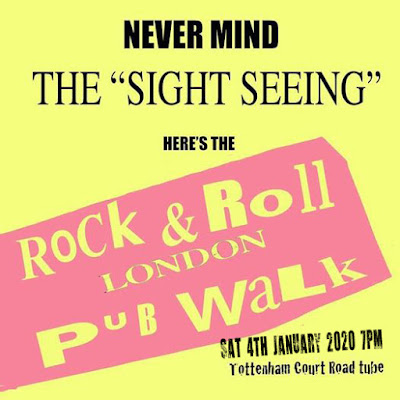 The history of Rock and Pop in London's West End… with a couple of pub stops along the way!

Discover the origins of one of history's biggest bands - Pink Floyd.
A walking tour for fans AND newbies.
Architecture students Roger Waters, Nick Mason & Richard Wright met at Regent Street Polytechnic in 1963. They founded R&B combo Sigma 6 (later the Screaming Abdabs and then The Tea Set) and were joined in '64 by charismatic painter & songwriter Syd Barrett. Syd melded the blues singers FLOYD council & PINK Anderson for the band's new name and brought an oh-so English take to their psychedelic sound.
The troubled Barrett has become a cult figure despite leaving the band in '68. His drug use and reclusive final years are the stuff of rock'n'roll legend.
David Gilmour (an old Cambridge friend of both barrett & waters) replaced Syd, and, with Waters as principal writer, they went on to sell millions of records over a period of 15 years of groundbreaking rock music followed by 20 years of very public artistic differences.
Five decades on, Floyd records still sell, new Sydologists join the cult every year and the debate rages on: Waters or Gilmour: which side are you on?
Have a cigar, you're gonna go far... This is Pink Floyd's London. We will visit…
The site of the UFO ClubThe site of Middle EarthRegent Sound StudiosDenmark StreetThe Regent Street PolytechnicThe BBCSyd’s old flats in the West End & South Kensington 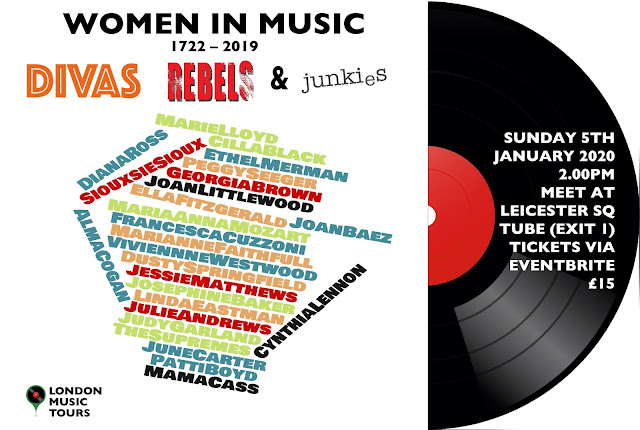 So what’s not to love about a songwriter’s muse? Think Pattie Boyd for both George Harrison’s Something and Eric Clapton’s Layla.
And who amongst us can tear their eyes away from the spectacle of the pill-stoked diva throwing tantrums through a series of calamitous relationships with men who can be described at best as being Not Proper Boyfriend Material. Judy. Amy. Whitney. But – to borrow from the great Peggy Lee – Is That All There Is?
Where are the rebels? The mavericks? The writers? The virtuosi?
They’re on Divas, Rebels & Junkies – Women In Music 1722 - 2019, the walking tour,
The track listing for this two-hour Musical Walking Tour in Three Acts features… the warring sopranos Francesca Cozzoni and Faustina Bordoni who drove Handel to distraction as they conquered London… the theatrical visionary and outsider Joan Littlewood who revolutionised British musical theatre… the folk purist Peggy Seeger who laughed Lonnie Donegan offstage… little Lillie Klot, the East End rag trade girl who, as Georgia Brown became this country’s finest interpreter of Kurt Weill and the original Nancy in Oliver!… the Harlem girl who was told she was too ugly to be a star and whose life was plagued with self-doubt - Ella Fitzgerald… Marianne Faithfull the convent girl of supposed aristocratic blood who topped the charts then hit rock bottom on the streets of Soho strung out on heroin, only to come back as one of the few true mavericks the British music scene ever produced… alongside Siouxsie Sioux, Marie Lloyd, Dusty Springfield, Jessie Matthews and more.
The tour will end at The Palladium Theatre – we go out at the top – with Judy Garland topping the bill. 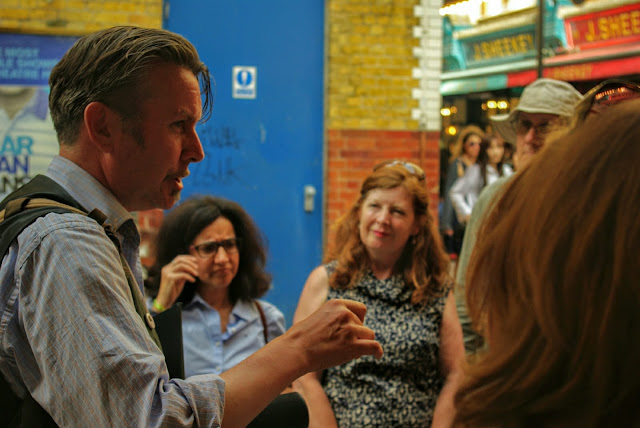 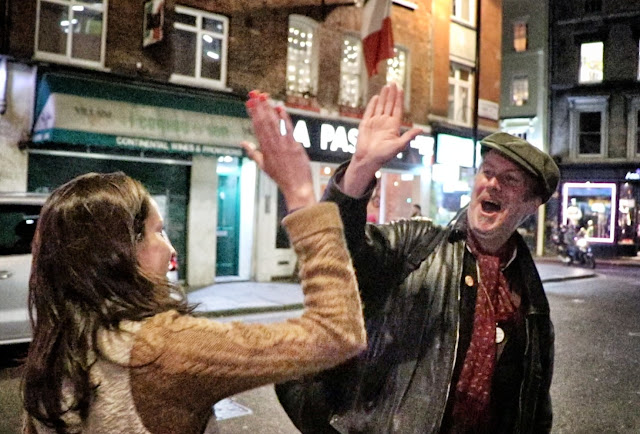 Beatles and Stones. The biggest names in Rock’n’Roll. Made right here in London.

Our walk visits their places, unravels the myths, looks at the music and asks, once and for all… who’s BEST? Beatles or Stones?

Along the way there’s a pub stop and a prize quiz. History, trivia, debate, opinion and music. 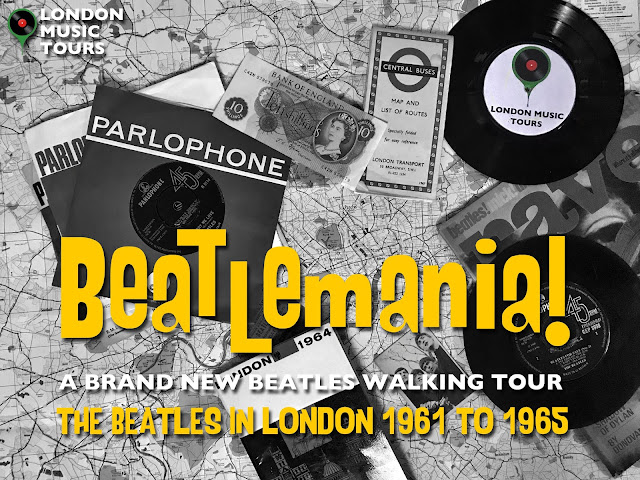