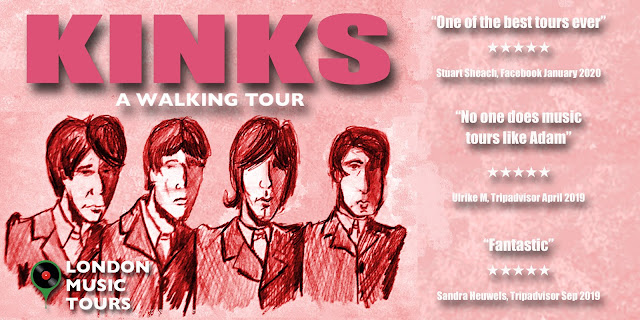 “Best ever London music tours… no one does music tours like Adam”
★★★★★
Ulrike M, Tripadvisor

We are the Fortis Green Preservation Society!

How three Muswell Hillbilly Boys (and a would-be Stone who passed over the river from down Richmond way) became Well Respected Men.

A guided tour in search of The Kinks in their glory days.

4 of the unlikeliest pop stars of all-time

Places… We’ll look at how this location – N2 & N10, North London – is woven into the fabric of their work.

Events… We’ll find out how WWII and its aftermath impacted on the golden generation of British pop and rock.

People… How and where Ray & Dave Davies changed the face of popular music and became the most notorious feuding brothers in rock’n’roll.

It's a walking tour… venues, homes, schools, dance halls, parks, cinemas, pubs where they played and composed and the stories behind Waterloo Sunset, Autumn Almanac, You Really Got Me, Come Dancing, Muswell Hillbillies and others.

It's a critical study… we’ll discuss their greatest hits and more - from their initial inspirations to their contemporary 60s influences right up to their 21st century legacy.

If you are joining the tour please feel free to chip in - bring any Kinks memorabilia that you would like to show, share your favourite “I once saw Mick Avory in…” stories and your favourite Kinks songs.

Adam Scott-Goulding is a qualified, award-winning tour guide with 15 years experience of curating and leading guided tours in London. Music tours are his speciality.

He first heard You Really Got Me at the age of 13 and it ruined his life… in a good way. He once spent £4.99 on the double album Spotlight On the Kinks leaving himself short of bus fare – and trudged home 8 miles in the rain wearing leaky, suede Chelsea boots but still says (37 years later) that it was totally worth it. (That’s how we rolled before Spotify.)

The tour meets at East Finchley Tube Station (Zone 3) and ends at Muswell Hill Broadway. The route covers just under 1.5 miles, it is wheelchair accessible and will last approximately 1 hour and 40 minutes (roughly the time it takes to listen to the albums The Kinks [1964], Something Else [1967] and The Kinks Are The Village Green Preservation Society [1968] back to back)