Announcing a NEW Tour For London 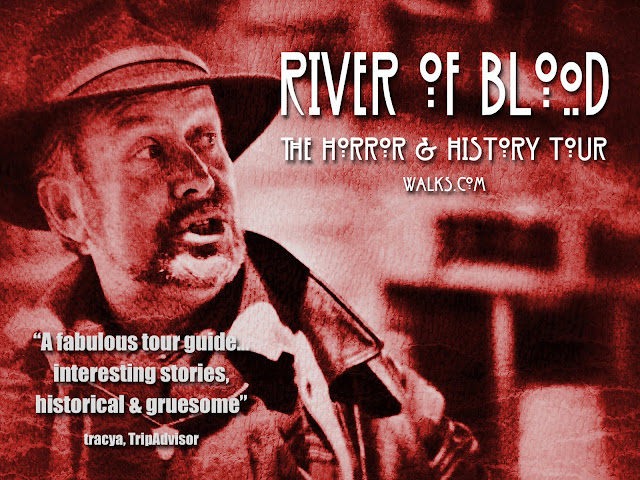 Launching in May 2020, join us on Tuesday nights for some historical murder and mayhem on the banks of the River Thames with River Of Blood – A London History & Horror Tour…

Murder and mayhem on the banks of the Thames - a gruesome gallimaufry.

A liberal dose of strychnine
One Absolute Monarch
One buried torso
A fair few rats
A pistol
At least two serial killers
The Metropolitan Police
A 19th Century Prime Minister
Some ricin
An axe
A handful of conspiracy theories
A large, Victorian sewer
2-3 ghosts/apparitions
A fancy hotel
A vampire
One suicide
Several strong doses of social and political history

While that’s cooking, dig up your buried torso and call the police. Then taking the axe, behead your Absolute Monarch. At this point your first Serial Killer should be ready for the conspiracy theories. Cook those together until the smell becomes pungent, then set aside.

Add your rats to the sewer. A few will spill out into the street, but don’t worry unduly. Add the suicide.

Take your pistol to the fancy hotel and mix with the second serial killer and the ricin. Sprinkle with your vampire.

Scatter your ghosts/apparitions throughout and, where appropriate, add the social and political history.

Blend the whole with a ferociously strong tidal waterway.